U.S. Democratic Sen. Al Franken apologized Thursday after a Los Angeles radio anchor accused him of forcibly kissing her during a 2006 USO tour and of posing for a photo with his hands on her breasts as she slept.
.

Leeann Tweeden posted the allegations on the website of KABC, a Los Angeles radio station where she now works as a news anchor for a morning radio show. Tweeden joined the then-comedian on one of several trips to entertain troops in December 2006.

She said that Franken told her he wrote a skit for the pair that included a kiss, and that despite her protests, she alleges he insisted they practice the kiss during rehearsal.

“We did the line leading up to the kiss and then he came at me, put his hand on the back of my head, mashed his lips against mine and aggressively stuck his tongue in my mouth,” she wrote.

Tweeden also included a photo of her sleeping on board an aircraft later during the trip, in which Franken is shown reaching out as if to grope her breasts. 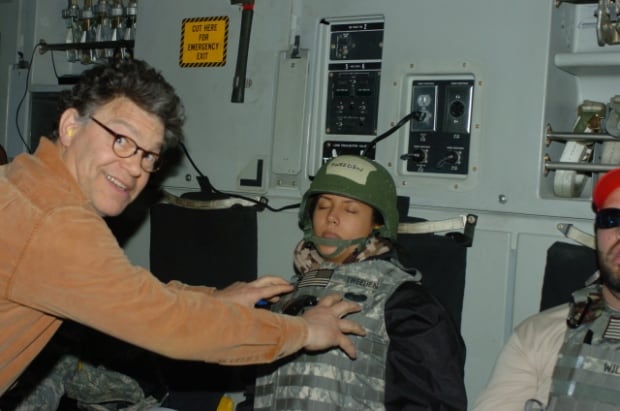 Franken has apologized for this photo that was included in Leeann Tweeden’s post about her experience with the former SNL writer, who is now a senator. (KABC)

Franken said in a statement that Tweeden’s account of the skit did not match his memory.

“But I send my sincerest apologies to Leeann,” Franken wrote. “As to the photo, it was clearly intended to be funny but wasn’t. I shouldn’t have done it.”

“I don’t know what was in my head when I took that picture, and it doesn’t matter,” he said. “There’s no excuse. I look at it now and I feel disgusted with myself.”