8/19/2017 by Mike Barnes and Duane Byrge, The Hollywood Reporter 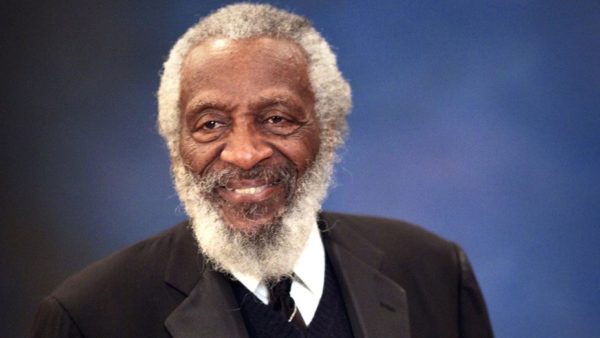 He broke ground at the Playboy Club in Chicago and on Jack Paar’s ‘Tonight Show,’ then became a potent activist for civil rights.

Dick Gregory, a pioneering force of comedy in the 1960s who parlayed his career as a stand-up into a life of social and political activism, has died Saturday of heart failure, his rep confirmed to The Hollywood Reporter. He was 84.

“It is with enormous sadness that the Gregory family confirms that their father, comedic legend and civil rights activist Mr. Dick Gregory departed this earth tonight in Washington, D.C.,” his son, Christian Gregory said via a statement from his father’s rep. “The family appreciates the outpouring of support and love and respectfully asks for their privacy as they grieve during this very difficult time.”

“He was one of the sweetest, smartest, most loving people one could ever know,” his publicist of 50 years, Steve Jaffe, tells THR. “I just hope that God is ready for some outrageously funny times.” A full statement and details of Gregory’s funeral will be released Sunday, Jaffe said.

According to an Aug. 17 statement written by his son, Gregory was recently hospitalized.

Regarded as the first African-American comic to perform regularly in front of white audiences, Gregory appeared on all of the top TV talk shows of the 1960s and ’70s.

The St. Louis native cynically satirized racism and other social ills during his routines (“Segregation is not all bad. Have you ever heard of a collision where the people in the back of the bus got hurt?”). As a way to mine his always timely material, Gregory followed a lifelong habit of stripping articles out of newspapers and magazines. His act was smart and rarely employed profanity.

Gregory’s big break came in 1961 when he was booked into the Playboy Club in downtown Chicago as a one-night replacement for Professor Irwin Corey, a white comic who didn’t want to work seven nights a week.

READ THE REST OF THIS LENGTHY OBIT  HERE  AT HollywoodReporter.com