by Nick Allen,  The (London)Telegraph, from Washington

CNN accused President Donald Trump of encouraging violence against journalists after he posted a video on social media showing himself body slamming and repeatedly punching a man with the cable news network’s logo superimposed on his face.

In the latest escalation of his war with the US news media the footage showed Mr Trump during a choreographed appearance attacking a rival at WrestleMania in 2007.

“It is a sad day when the President of the United States encourages violence against reporters,” CNN responded in a statement. Carl Bernstein, the Watergate journalist who is now a CNN commentator, called the video “very disturbing”

The latest controversy came as Mr Trump rejected growing appeals from senior Republicans to stop using the micro-blogging site Twitter to communicate with his millions of followers.
.

They said his engagement in increasingly vicious feuds with the news media and individual TV presenters on Twitter was demeaning the office of president and overshadowing attempts in Congress to push forward his legislative agenda including healthcare and tax reform.

However, Mr Trump vowed to continue his combative approach. He wrote on Twitter: “My use of social media is not Presidential – it’s MODERN DAY PRESIDENTIAL. The FAKE & FRAUDULENT NEWS MEDIA is working hard to convince Republicans and others I should not use social media.

“But remember, I won the 2016 election with interviews, speeches and social media. I had to beat Fake News, and did. We will continue to WIN!”
.
READ THE REST OF THIS STORY  HERE  AT TheTelegraph.co.uk 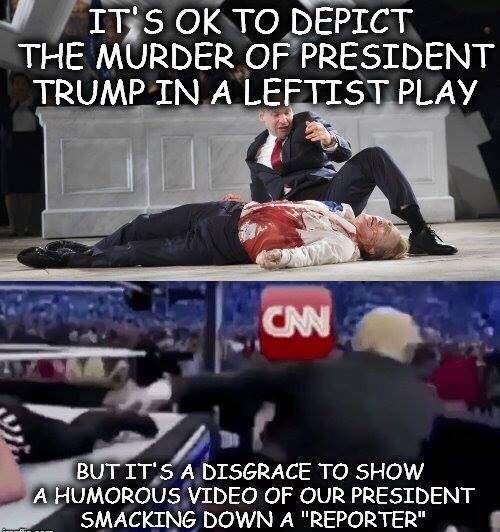