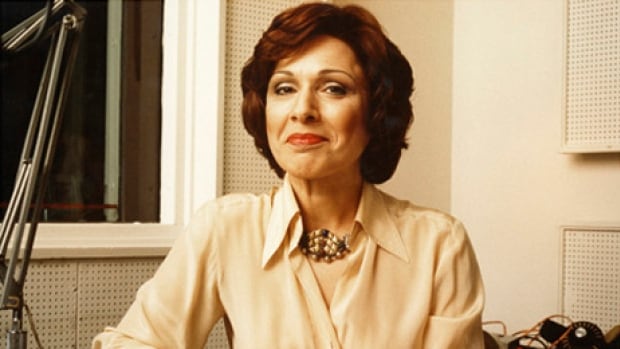 Barbara Frum, known best to Canadians as co-host of CBC Radio’s As It Happens and later for CBC Television’s The Journal, has been inducted into the CBC News Hall of Fame.

On hand for the ceremony Tuesday were several friends and colleagues, along with members of her family.

Peter Mansbridge, chief correspondent for CBC News and anchor of The National, introduced speakers including her producer and longtime friend, Mark Starowicz, and read part of Starowicz’s written tribute:

“Barbara was half Lois Lane, half Jewish mother. People would confess everything to her. This woman was incorruptible. This was an honest woman.”

Starowicz remembered when Frum announced — despite battling a bad case of the flu — that she was ready to go on air for The Journal the night of the bombing of Baghdad was about to begin on Jan. 17, 1991 and how she had to be replaced because her voice was too hoarse.

“The single most distinguished journalist in Canada was delivering coffee and wire copy on the night of the biggest story she wanted to cover,” he said, adding, “one way or another she was going to be there.”

During a career that spanned two decades Frum was known for an interviewing style that was both thoughtful and direct.

One of her most famous interviews included a sit-down with South African anti-apartheid legend Nelson Mandela the day he was released from prison on Feb. 14, 1990.

Another notable exchange came in March 1979 during a phone interview with Harold Ballard, the fiery owner of the Toronto Maple Leafs, who told her that women on the radio are “a joke.”