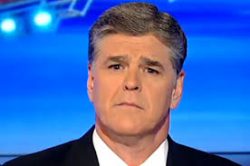 “Gäbe i pray this is NOT true because if it is, that’s the total end of the FNC as we know it. Done,” Hannity tweeted.

According to Sherman’s reporting, Shine recently asked James and Lachlan Murdoch, the 21st Century Fox CEO and chairman, to publish a statement in support of him. Shine’s reported request followed weeks of intense scrutiny of the network after the recent ousting of Fox’s most popular host, Bill O’Reilly, amid a sexual harassment scandal.

Spokespeople for Shine and the Murdochs denied that Shine asked for a statement of support.

Soon after his first tweet responding to Sherman’s story, Hannity tweeted again, apparently referring to Shine, that “somebody high up and inside FNC is trying to get an innocent person fired. And Gabe I know who it is.” Hannity then tweeted, “#Istandwithbill” and “#Istandwithshine” in support of the Fox executive.

Shine took over as co-president after the network’s former chief, Roger Ailes, was forced out in the summer of 2016 amid allegations that he also sexually harassed women for years.