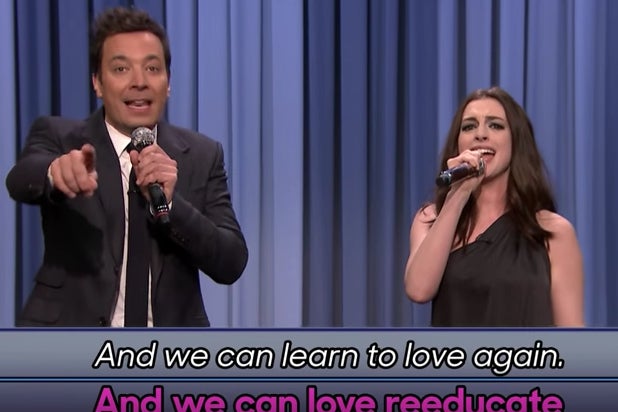 Jimmy Fallon and Anne Hathaway on ‘The Tonight Show’

Older-skewing CBS might counter that they focus more on the 25-54 demo, but “Tonight” won that one too. It also cleaned up among millennials, though that shouldn’t come as much of a shock to those who pay attention to these sorts of things.

But here’s something Leslie Moonves can hang his (probably really expensive) hat on: CBS’ “Late Show” still brought in more overall audience members per episode than Fallon, with 2.826 million versus NBC’s 2.591 million, per Nielsen.

This past week was what we in the biz call a “clean” one for the top two late-night series, with five nights of original episodes for both shows and no sports overruns.

Oh, and in case readers were wondering, “Jimmy Kimmel Live” finished in its usual place — a distant third. Jimmy Kimmel’s ABC show was a rerun on Friday, though.