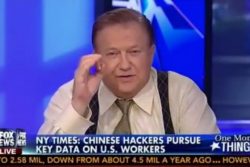 Juan Williams, who replaced Beckel in the summer of 2015, will continue to have guest appearances on “The Five” and other Fox News programs.

“I’m thrilled for the opportunity to go home again and join my television family around the table of ‘The Five’,” said Beckel in a statement. “I have no doubt it will be a vigorous yet entertaining debate.”

Beckel first left “The Five” in February 2015 after a four-year run on the show, with Fox News explaining that he was taking time off to recover from back surgery.

But in April, the network revealed that Beckel had checked into a rehab facility to deal with a prescription drug addiction. He was released by Fox News two months later.