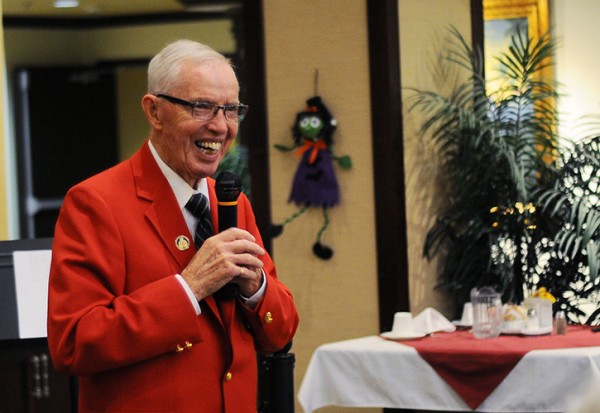 George Garrett, 81, tells stories from his past to the crowd gathered in the Peninsula Retirement Residence Friday afternoon. Aaron Hinks photo

George Garrett still knows how to tell a story.

Garrett, 81, spent 43 years working as a broadcast journalist for CKNW.

He was at the Peninsula Retirement Residence Friday to tell stories from his past, raise money for the Volunteer Cancer Drivers Society and talk about his new book, The Life and Times of Lighthouse McNeil.

Garrett started working for CKNW in 1956. He describes it as the golden age of broadcast journalism.

He didn’t have daily deadlines. He went to the beat of his own drum when it came to gathering news.

Garrett looked in his element as he relived one of his stories from his journalism days.

“Totally against the law. I thought… how am I going to get this story? I’m going to pretend I’m a tow driver,” Garrett told the crowd.

Garrett explained how he bought some work boots, stopped shaving for a couple of days and went into the unemployment office. His plan was to gain some experience as a tow-truck driver in a legitimate company then possibly go work for the fraudulent company.

“I thought, if I apply for unemployment insurance, that alone is fraud because I’m not unemployed. But, it’s a story, so I applied,” Garrett told the audience.

Garrett used his middle name, Reno, to throw off suspicion that he was undercover.

After filing for unemployment insurance Garrett drove to Coquitlam Towing and asked the boss for a job.

Garrett – thrown off by the question – asked “what’s wrong, am I too old?”

“He said ‘age has nothing to do with it, you’re George Garrett with CKNW. I saw you on the Pattullo Bridge yesterday morning.”

Despite his cover being blown within the first minute of his operation, Garrett was still able to work with Coquitlam Towing for his story.

After gaining experience he went to the fraudulent company and asked for work. It turns out the company wasn’t as secretive about the fraud as Garrett speculated it would be, and sure enough, Garrett had his scoop.