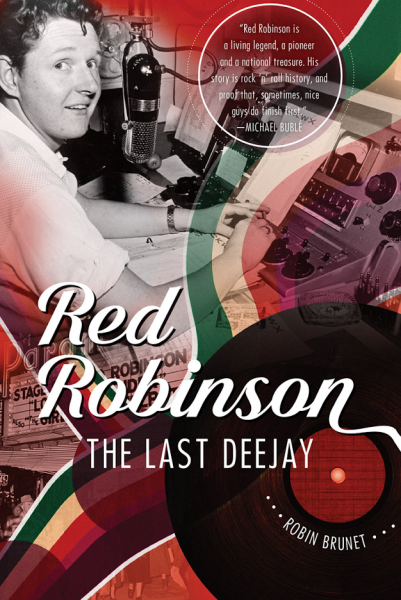 Red Robinson details the life and career of Red Robinson, one of Canada’s most celebrated pioneers of rock and roll. Robinson began spinning hits while in high school in the early 1950s, laying the foundation for what would become a glamorous, impossible-to-stop and ultimately fulfilling career that has made him a household name west of the Rockies.

Raised by a single mother, Robinson worked as a delivery boy to help support the family. From such humble beginnings, he developed a strong work ethic and unflappable moral core that enabled him to pursue a career that has endured. Here is the account of how Robinson pranked his way into his first radio job. Readers will be delighted by behind-the-scenes stories from close encounters with Vancouver’s visiting celebrities, like the time Robinson spent an hour with Elvis Presley in the BC Lions dressing room talking cars, women, movies and opera, or when Robinson nearly killed Roy Orbison and Bobby Goldsboro in a 1962 Grand Parisienne convertible while speeding to catch the Nanaimo ferry.

Robinson’s vast career highlights are remarkable, from introducing The Beatles to the stage, ushering Randy Bachman to the status of superstardom, and as part of EXPO ’86, presenting The Legends of Rock’n’Roll featuring Ray Charles, Roy Orbison, Fats Domino, Jerry Lee Lewis and The Righteous Brothers. Red Robinson recalls the highs, hurdles and triumphs of a celebrated time in rock-and-roll history, presented by the man who dug into the guts, glory and glitz that only a champion of the frontlines of music really can.

Get your picture taken posing with Red, Robin and The Book! Annnnnnndddd… like the official RRTLDJ Facebook page at https://www.facebook.com/thelastdeejay/ to stay up to date on the latest shameless self-promotion!