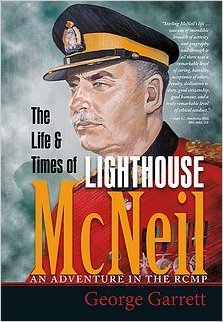 George Garrett, the award-winning journalist can add biographer to a distinguished list of accomplishment and accolades. He is the author of The Life and Times of Lighthouse McNeil: An Adventure in the RCMP. It’s a biography of Sterling McNeil, a remarkable figure whose distinguished career with the Royal Canadian Mounted Police brought credit to the force and the country. He also served with the RCAF during World War II, and was the officer in charge of the RCMP Musical Ride. I’ll ask George about the life of McNeil, why he was called Lighthouse, what endeared him to his family and friends, just how widely respected he was at home and abroad, and how he came to write this book. George Garrett is himself distinguished in this community for his nearly fifty year career in broadcast journalism. He has been twice honoured by the BC Association of Broadcasters, as well as the recipient of lifetime achievement awards from the BC Association of Broadcasters, the Radio and Television News Directors of Canada, and the Jack Webster Foundation receiving their Bruce Hutchison Award. In 1993, he was named an honorary member of the RCMP Veteran’s Association, Vancouver Branch, and made a life member in 2013. This new book is published by Your Nickel’s Worth Publishing. You can order it as I did from the RCMP Heritage Centre in Regina. Their website is at www.rcmpheritagecentre.com.

Listen to the interview HERE