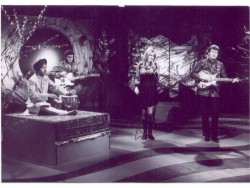 Vancouver music legends Terry and Susan Jacks are both in hospital, recovering from serious health problems.

Terry, 72, suffered a stroke at a house he owns in Haida Gwaii about two weeks ago. It was his second stroke in the last six months.

“He’s been recuperating up in Haida Gwaii since his last stroke,” said his friend Jamie Anstey.

“He was doing really well, but something happened and he had another stroke and had to be airlifted to Prince Rupert Hospital and then to Lions Gate (in North Vancouver) for a procedure.”

Susan, 68, has been in Surrey Memorial Hospital for several weeks with kidney problems.

Susan Jacks performs with The Poppy Family Experience at the annual Khatsahlano Festival in Vancouver on July 12 2014. Gerry Kahrmann / PNG

Earlier this week her son Thad Dushinski said in a Facebook post that “she is currently having the fight of her life from various complications from kidney disease,” and had been on life support.

But she rallied, and when her former Poppy Family cohorts Craig McCaw and Satwant Singh visited her Monday, she was in good spirits.

“A couple of days ago she was in intensive care, and was right on the edge,” said McCaw.

“But we saw her (Monday), and she’s bounced right back. It’s pretty incredible. She has lots of energy and we were cracking jokes.”

“I saw her a week ago and she was in an induced coma, but when I saw her (Monday) she was great, she was laughing and chatting and storytelling. She had quite an experience, almost like a near-death experience type thing.”

Susan received a kidney transplant in 2009, with a kidney donated by her brother Bill. She had been in good health until her recent health scare.

Terry was born in Winnipeg and moved to Vancouver as a kid. Susan was born Susan Pesklevits in Saskatoon, and grew up in Haney and New Westminster.