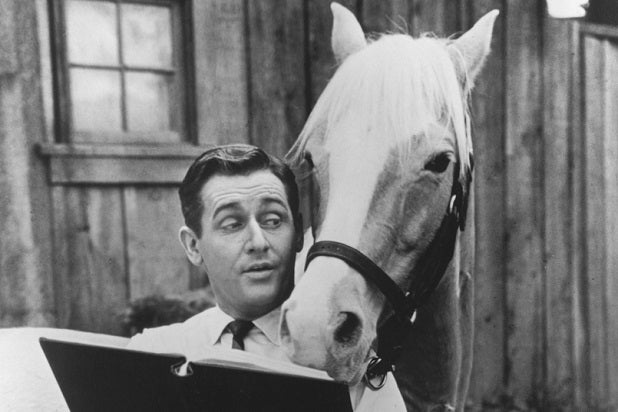 Alan Young, who starred as Wilbur Post on the 1960s TV series “Mister Ed,” died Thursday, a spokesperson for the actor told TheWrap. He was 96.

Born in North Shields, Northumberland, England, Young and his family moved to Edinburgh, Scotland, and later to Vancouver, Canada. After a stint in the Royal Canadian Navy, Young landed his own radio series (‘Stag Party’) on the Canadian Broadcasting Corporation, from Vancouver.

After moving to the U.S., he starred on NBC radio’s “The Alan Young Show.”

Young gained his greatest fame, however, as Wilbur Post in the CBS comedy “Mister Ed,” as the owner of a talking horse who spoke only to Post, leading to humorous situations for everyone around him. The series ran from 1961 to 1966.

The actor’s equine “Mister Ed” costar, Bamboo Harvester, lived until 1970, when he was euthanized after suffering from a number of health ailments. The lovable Palomino was later buried at Snodgrass Farm in Oklahoma.

READ THE REST OF THE STORY  HERE  ON THE WRAP WEBSITE