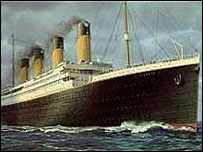 at 11.40 pm, two young wireless radio operators at Cape Race, Newfoundland, Robert Hunston and James Goodwin heard the first distress call from the luxury liner RMS Titanic, en route to New York south of the Grand Banks. An iceberg had grazed the ship’s side, popping iron rivets and shearing off a fatal number of hull plates below the waterline. The great ship, on its maiden voyage, sank just under three hours later. 1,517 passengers were lost at sea.

In 1922, Jeanette Vreeland sang the first radio concert from an airplane as she flew over New York City.

In 1925, the Chicago Cubs broadcast a regular season baseball game for the first time on radio station WGN Chicago.  The Cubs beat Pittsburgh 8-2.

In 1930, Robert Ripley overcame his shyness and a stutter to host the first of his Believe It Or Not radio programs on NBC, about strange and freakish facts.  The show would intrigue listeners on various networks for the next 18 years, and continues even today on TV. 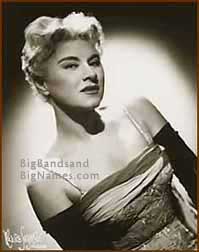 In 1941, the elegant cabaret singer Hildegarde recorded the standard “Darling Je Vous Aime Beaucoup” on Decca Records.  It took another 14 years, but Nat ‘King’ Cole turned the song into an even bigger hit, landing at number 7 on the pop music charts.

In 1942, the wildly popular Detroit radio priest, Father Charles E. Coughlin was censured for a pattern of anti-Semitism.

In 1955, Fats Domino‘s “Ain’t It A Shame” was released on Imperial Records.

While this was the first single to crossover from R&B to the pop charts, it was Pat Boone‘s cover version (Ain’t THAT a Shame) that made it to number one.

In 1956, Ampex Corporation of Redwood City, Calif. demonstrated the first commercial magnetic tape recorder for sound and picture. The videotape machine had a price tag of $75,000. These early Ampex units were too large to fit in a small room. That’s back when bigger was better.

Also in 1956, in a Nashville studio Elvis Presley recorded his second single for RCA Victor, “I Want You, I Need You, I Love You.”

Still in 1956, singer Bobby Helms auditioned for Decca Records and was  signed on the spot.  His first recording session was in Nashville 11 days later.

In 1958, piano virtuoso Van Cliburn appeared on US national TV for the first time. He was a guest on NBC’s “The Tonight Show” with host Jack Paar.

Also in 1958, little Laurie London reached the top spot on the music charts with “He’s Got the Whole World in His Hands”. The same day “Catch A Falling Star” by Perry Como became the first single certified as gold by the Recording Industry Association of America. In 1962, Bob Dylan recorded seven songs, including “Blowin’ In The Wind,” at the Columbia Records studios in New York.

In 1963, the Beatles met the Rolling Stones after a Stones concert in Richmond, England.

In 1964, Motown released a duet record featuring Mary Wells and Marvin Gaye. Both sides — “What’s the Matter With You Baby” and “Once Upon a Time” — became hits. Wells later said Motown used her name to bolster Gaye’s standing with the pop audience.

In 1965, Millie Small appeared on ABC-TV’s “Shindig!” and performed her ska hit “My Boy Lollipop.” 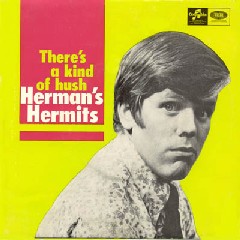 In 1967, Herman’s Hermits, featuring lead singer Peter Noone, went gold with the single, “There’s a Kind of Hush.” It was a two-sided hit, with the flip-side, “No Milk Today,” also receiving considerable play.

Also in 1967, Atco Records released The Bee Gees‘ first single, “New York Mining Disaster 1941,” with a promotional slogan heralding them as “The most significant talent since the Beatles.” In fact rumours abounded that they were indeed the Beatles, and that “Bee Gees” stood for “Beatles Group.”

In 1969, the musical “Oliver!” was named Best Picture at the Academy Awards, with the only-ever tie for Best Actress shared by Katherine Hepburn and Barbra Streisand. 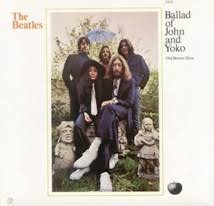 Also in 1969, The Beatles‘ song “The Ballad Of John and Yoko” was recorded by Paul McCartney and John Lennon. With the other two Beatles unavailable Paul played bass, drums and piano; John played guitars and sang the lead vocal.

Still in 1969, The Monkees‘ TV special, “33 and one-third Revolutions per Monkee,” aired on NBC. The plot featured rock musicians Brian Auger and Julie Driscoll as mad scientists looking for something to rot the minds of young people.

Again in 1969, RCA Victor released the single that would spur Elvis Presley‘s comeback, “In the Ghetto.” Peaking at #3, it became his first Top 10 hit in over five years. 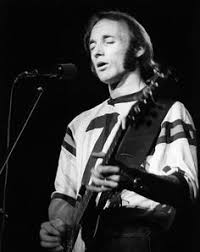 In 1970, Stephen Stills broke his wrist in a car accident, resulting in the cancellation of a U-S tour by Crosby, Stills, Nash and Young. Stills smashed into a parked vehicle while looking at a police cruiser in his rear-view mirror.

In 1971, the Illinois Crime Commission issued a list of records it considered to be “drug-oriented” including “White Rabbit” by Jefferson Airplane, “A Whiter Shade Of Pale” by Procol Harum, and  The Beatles’ “Lucy In The Sky With Diamonds.”

In 1974, the No. 1 Billboard Pop Hit was “TSOP (The Sound of Philadelphia),” by MFSB featuring the Three Degrees. The song is the theme to the TV program “Soul Train.” 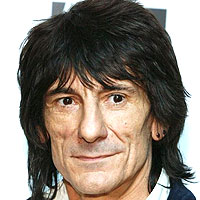 In 1975, after a long audition process during the recording of their album “Black and Blue,” and after many rumors about who would fill the position, The Rolling Stones announced that former Faces member Ron Wood (above) would be their new guitarist, replacing the departed Mick Taylor.

In 1976, Motown Records announced a 13 million-dollar contract renewal for Stevie Wonder. At the time, it was the largest contract ever negotiated.

Also on this date in 1980, the first rock videocassette, a concert by Gary Numan, was released.

In 1983, Pete Farndon, bass guitarist with the rock group, the Pretenders, drowned in his bathtub at his home in England, after overdosing on heroin. He was aged 30.

In 1984, Michael Jackson made a six-figure contribution to establish a 19-bed cancer research unit at a New York hospital.

In 1989, former Byrds Roger McGuinn, David Crosby and Chris Hillman filed suit in Tampa to prevent Michael Clarke from using the band’s name. Clarke was the Byrds’ original drummer. But the suit claimed Clarke did not contribute to the group’s distinctive sound, and accused him of false advertising and deceptive trade practices.

Also on this date in 1989, Nova Scotia singer Rita MacNeil made her U-S concert debut in Boston. The show, at the 12-hundred-seat Berklee Performance Centre, was a near sell-out, with the audience giving her three standing ovations.

Still on this date in 1989, the second World Music Video Awards were telecast live via satellite from Toronto, New York, London, Munich, Moscow, Hong Kong and Australia. The show reached an estimated 750 million viewers in more than 50 countries. For the first time, the broadcast was seen throughout the Soviet Union and Eastern Bloc countries.

In 1990, rhythm-and-blues singer Thurston Harris suffered a fatal heart attack in Pomona, California at age 58. His only major hit, and still a favourite oldie, was “Little Bitty Pretty One,” which reached #6 in 1957.

In 1992, pianist Sammy Price, known as the “King of Boogie Woogie,” died at his Harlem home at age 83. During his seven-decade career, Price played with such jazz and rhythm-and-blues giants as Sidney Bechet, Lester Young and King Curtis. In 1993, Joan Baez performed for 700 people in the war-torn Bosnian capital of Sarajevo. Many fans wept as Baez sang “Swing Low, Sweet Chariot” and John Lennon’s anti-war song, “Imagine.” The applause helped drown out the gunfire and sporadic shelling that continued throughout the concert.

Also in 1994, drummer Paul Hester abruptly quit Crowded House following an Atlanta concert by the Australian group. Hester cited the grind of touring, and said he felt himself drifting away from fellow band members Neil Finn and Nick Seymour. He also complained that his song “Skin Feeling” was only grudgingly included on Crowded House’s album “Together Alone.” Hester committed suicide on March 26th, 2005 in Australia.

In 1995, Burl Ives, whom poet Carl Sandburg once called “the mightiest ballad singer of this or any other century,” succumbed to oral cancer at his home in Anacortes, Washington. He was 85. Ives’ folk hits in the ’50s and ’60s included “The Blue Tail Fly,” “Little Bitty Tear,” “Funny Way of Laughin'” and “Holly, Jolly Christmas.” He also gained fame as an actor, winning an Oscar in 1958 for his supporting role in “The Big Country.” But he was best known for his stage and screen portrayals of “Big Daddy” in Tennessee Williams’ “Cat on a Hot Tin Roof.”

In 1997, Ringo Starr debuted as the host of the VH1 program “Classic Albums.”

In 1999, British entertainer Anthony Newley, best known for his 1960s stage hit “Stop the World — I Want to Get Off,” lost his battle with renal cancer at his home in Florida. He was 67. Newley’s showcase song in “Stop the World” was “What Kind of Fool Am I?” He also co-wrote the show’s score, as well as “The Candy Man” for Sammy Davis Junior and the James Bond movie theme “Goldfinger” for Shirley Bassey. Again in 1999, TV announcer/host Bill Wendell (The Late Show with David Latterman, To Tell The Truth, Sale of the Century, Tic Tac Dough) died of cancer at age 75.

Still in 1999, the body of Tammy Wynette was exhumed and an autopsy performed in Nashville at the request of Wynette’s husband George Richey.

Once more in 1999, it was reported that Prince intended to re-record the entire catalog of his music and re-release it.

In 2002, B-C-based artists won three trophies each at the Juno Awards in St. John’s, Newfoundland. Nanaimo’s Diana Krall (below) won for best artist, and best album and vocal jazz album for “The Look of Love.” Vancouver rock group Nickelback won best group, best single for “How You Remind Me,” and top rock album for “Silver Side Up.”

In 2003, former “American Bandstand” host and media mogul Dick Clark revealed that since 1994 he had been suffering with Type 2 diabetes, but he’d revealed it only to close friends and family.

In 2004, Dolly Parton received the Living Legend award from the U.S. Library Of Congress.

In 2005, singer/songwriter/guitarist Steve Jablecki of Wadsworth Mansion (Sweet Mary) died at the age of 59.

In 2009, former Beatle George Harrison was honored with a posthumous star on the Hollywood Walk of Fame outside the Capitol Records building.

In 2010, the Ozzy Osbourne song “Let Me Hear You Scream” was heard on the soundtrack of the CBS TV procedural CSI: New York. The song was played in a scene depicting a prison riot.

In 2011, a UK actor who became known in North America with his roles in the popular TV ‘Britcoms,’ “Last of the Summer Wine” and “Are You Being Served?”, Trevor Bannister suffered a fatal heart attack at age 76.

In 2012, Guns N’ Roses, Red Hot Chili Peppers and the Small Faces/Faces were inducted into the Rock N’ Roll Hall of Fame in Cleveland.

Also in 2013, Justin Bieber caused outrage after writing a message in a guestbook at the Anne Frank Museum, which stated he hoped the Holocaust victim would have been a fan. The 19-year-old wrote: “Truly inspiring to be able to come here. Anne was a great girl. Hopefully she would have been a belieber.” It provoked fierce online criticism of the Canadian singer, who was in Amsterdam as part of a tour.

In 2015, soul singer Percy Sledge, the rock & roll Hall of Famer who belted out “When a Man Loves a Woman,” lost his battle with liver cancer at age 74.

Actor Peter Capaldi (Doctor Who, The Musketeers) is 58.

Actor Brad Garrett (How to Live With Your Parents, Everybody Loves Raymond, Till Death) is 56.

Actor Robert Carlyle (Once Upon a Time, SGU Stargate Universe) is 55.

Actress Gina McKee (The Borgias) is 52.

Actress Catherine Dent (The Shield) is 51.