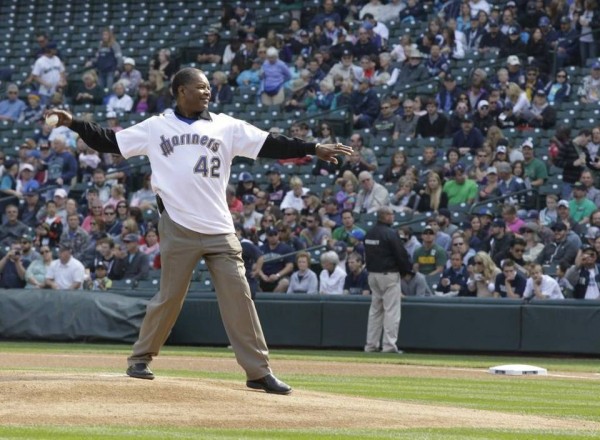 Dave “Hendu” Henderson, who played for the Seattle Mariners from 1981 to 1986, throws out the first pitch of a baseball game against the Texas Rangers, Sunday, Sept. 23, 2012, in Seattle. Ted S. Warren AP

SEATTLE — Former outfielder and broadcaster Dave Henderson, known forever as Hendu and for his irrepressible nature, died Sunday at Harborview Hospital in Seattle after a massive heart attack.

Tributes rolled in immediately from all corners.

“Dave Henderson was one of those guys,” former teammate Rickey Henderson said, “you don’t come across enough in life. He energized you and made you laugh.”

Henderson was the Mariners’ first-ever draft pick in 1977 and reached the majors in 1981. He spent six big-league seasons with the club before an Aug. 19, 1986 trade sent him to Boston and set the stage for his career highlight.

The Red Sox were one out away from elimination in the 1986 American League Championship Series when Henderson hit a two-run homer against California Angels reliever Donnie Moore.

Boston later won that game in extra innings and won the next two games in the series and advanced to the World Series.

“People bring up the home run all the time,” Henderson recalled years later, “and I still think about it a lot. How can I not think about it? It changed my life. It turned my career around.

Hendu was a Mariners’ color commentator on their radio & TV broadcasts for 11 seasons after his playing days.