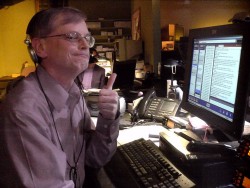 By Dave Biro
The Vultures Roost

People usually remember their first job in their chosen career with a little bit of nostalgia.

Often that includes the name of their first boss, what the office was like, and probably how little they were paid.

I had all of that and more – but what I mostly remember is fear, lots of fear.

I’d completed my broadcast training and hit the road looking for a job.

Driving a 1969 Datsun 1000, loaded with a sleeping bag, demo tapes, and a map I headed up the Fraser Valley into the BC interior. I’d determined the Vancouver market was one that I was not ready for, so I sought some place small, where I could make a few mistakes and not get fired too quickly.
You know, some place not too difficult to start out, but where you could learn a lot.

I got as far as Kelowna , and there got a phone call from the first place I’d dropped off a resume’ – Abbotsford BC.

The guy on the line had a job offer for me, radio news, evenings and weekends for the princely sum of $375 a month. It was 1973, and that kind of pay was real tight for the times, but what the hell, it was a start.

He asked when could I start, and I said as soon as I can get on the road and get there.
I arrived the next day.

I remember the News Directors first name was Terry, I don’t recall his last name. I don’t recall how long he’d been there, but he had the look and feel of a man who already wanted to get out.

We had a brief meeting, very brief, and I was hired.

Now the fear started to creep in, and it would get worse.

“Terry” now really looked like he wanted to get out of there–like now , or yesterday.
And so came the question from him- when can you start your first shift?

Remember I had taken the bait, and like an over eager fish I answered –I can start right away.

And with that Terry stood, got his coat on, plopped his hat onto his head and said:
” The newsroom is down the hall, it’s 10 past 2, and you’re reading the 3 O’Clock news”

Before I could try to shake the hook out of my mouth and dart for cover, he was gone, walked out the front door of the station building and drove away.

I found the newsroom, in it sat a man who looked perplexed as I walked in. His name was Con Hild , the sports guy.

I explained I’d just been caught, er hired, and I had to read the news on air in about 45 minutes, without any kind of training or orientation.

Con was a great guy and he helped me out, showing me the basic ropes of the place, what the format was , what commercial breaks played in that next newscast and so on.

Now it was 10 to 3, nothing had been written or prepared, there was no more that could be done but grab some wire copy from the Canadian Press teletype , a big metal monster of a thing that ground out stories. It was a noisy beast, but it was my salvation.

The next few minutes were a blur, I read that news cast, signed it off, and melted.

Always fear a phone ringing right after you’re read a newscast. It is seldom good.

It was ” Terry” with a short message- “Guess you’ll do, come in at three tomorrow for the start of your first real shift ”

I looked over to the sports guy, and he said :   ” He does that all the time, he hires somebody throws them on air, and if they make it, they have a job”

“Terry” not long after left Abbotsford .

I stayed, but not for long.

I can sure relate to that.