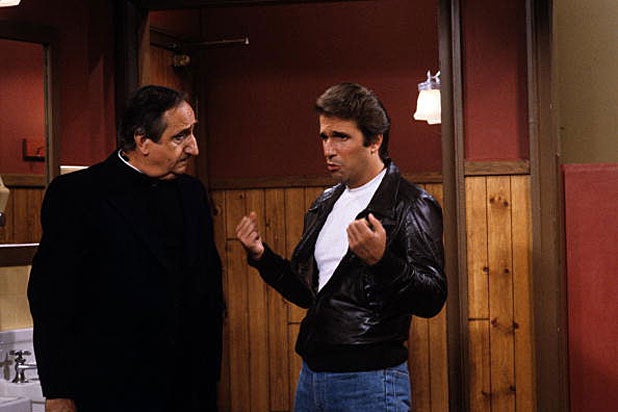 “Happy Days” star Al Molinaro died in a Wisconsin hospital on Thursday. He was 96.

The actor (pictured above left) is best known for playing Al Delvecchio, the owner of Arnold’s restaurant, on the iconic ABC show and its spin-off, “Joanie Loves Chachi.”

Molinaro’s son confirmed the actor’s death to TMZ, telling the website that he had severe gall stones.

In his role as Big Al on “Happy Days” for 10 years alongside Henry Winkler‘s Fonzie (above right), he became famous for spinning long tales that always started with, “Yep, yep, yep, yep, yep.”

Molinaro also appeared on “The Odd Couple,” “The Ugly Family” and in Weezer’s music video for “Buddy Holly.”

Born in Kenosha, Wisconsin, to Italian immigrant parents, Molinaro moved to California in the 1950s before pursuing his dream of acting. He began his career on the small screen in the role of Officer Murray Greshler on “The Odd Couple” by poking his nose through the peephole doorway of Oscar and Felix’s apartment before walking in.

He retired from acting in film and television in 1992, but would continue to appear in TV commercials until the early 2000s.

He is survived by his second wife, Betty Farrell, and son, Michael.