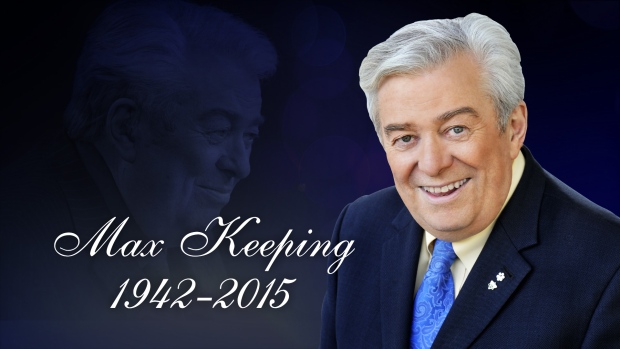 A tidal wave of tears flowing in the capital today. Ottawa has lost its greatest cheerleader.

Broadcasting legend and community leader Max Keeping passed away after a long and debilitating battle with cancer. Max was 73.

Carol Anne Meehan was Max’s co-anchor for 22 years. “He was a selfless man who loved life – and lived it to the max. There will never be anyone like Max Keeping ever again.“

CTV Ottawa Chief Anchor Graham replaced Max when he retired, “ It wasn’t just about the news, charity work and public service. For him, it was the whole package…and it was huge.”

Long time weather man J.J Clarke spent 25 years with Max. ”Max was blessed with a rare gift. He was able to connect with people on-air and in person. I don’t think there was a hand he didn’t shake in our viewing region. “

CTV News at Noon anchor Michael O’Byrne was hired by Max in 1981. He remembers a tough boss with a huge heart. “He made us all better story tellers by demanding we do better. He made us better people by showing us the way.”

“Upon his welcome in heaven, Max will be in his glory. Imagine a party that lasts an eternity?”, says Regional Contact host Joel Haslam.

Winston Maxwell Keeping retired from CTV Ottawa five years ago after 37 years on the anchor desk.

In 1972, after a failed run to become a Newfoundland MP – Max took over the anchor desk at CJOH, Ottawa.

As a newsman, Max was one of the best. As a community leader – there was no equal.

Max used his celebrity to support literally thousands of causes large and small. From the Children’s Hospital of Eastern Ontario to step dancing competitions in the Ottawa Valley, it’s estimated that he helped to raise more than $100 million dollars over nearly four decades.

Max was always humbled by the recognition his good deeds received – and there were so many. CHEO named a wing in his honor in 2003. He was awarded the Order of Canada and the Order of Ontario. The City of Ottawa gave Max the key to the city. Broadcasters recognized him with a Gemini Award for Humanitarian work. And he received honorary doctorates from both uOttawa and Carleton University.