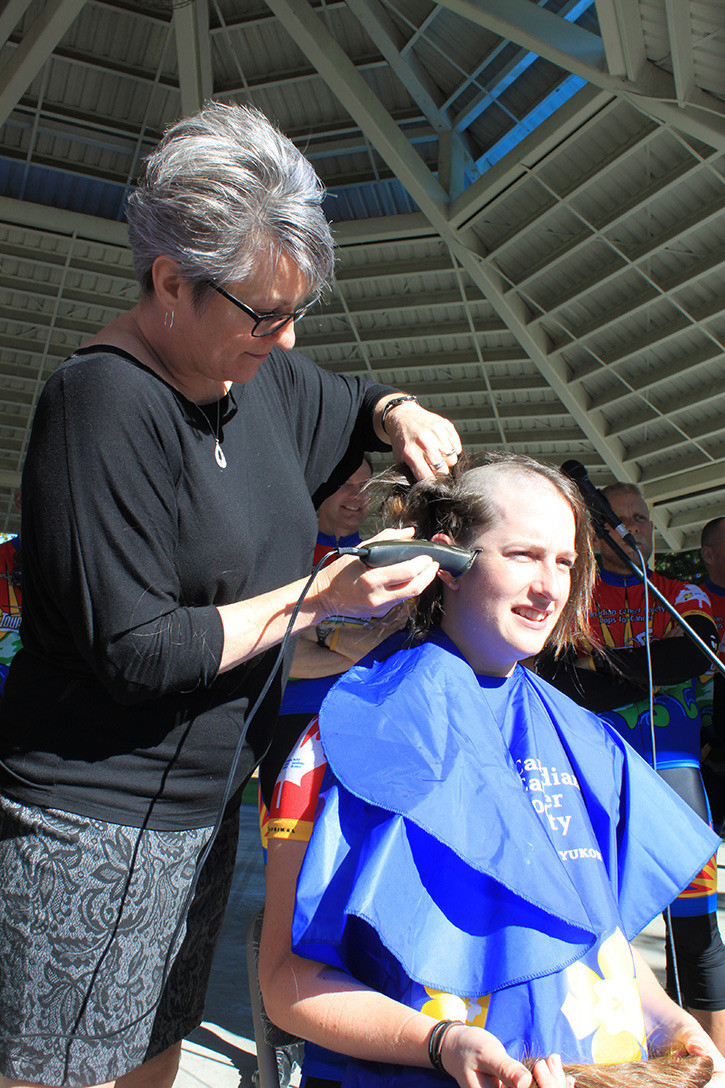 Cops for Cancer Tour de Rock rider Hilary Eastmure has her hair shaved off by Terese Koster of Uptown Hair Lounge during an event at Maffeo Sutton Park Monday.

“Life moves pretty fast. If you don’t stop and look around once in a while, you could miss it.”

While those words were uttered by Matthew Broderick in the 1986 film Ferris Bulleur, enjoying the the moment is exactly what Cops for Cancer Tour de Rock team member Hilary Eastmure has been doing while on the ride of her life.

On Monday afternoon, Eastmure, a broadcast journalist for 91.7 Coast FM, along with 20 riders on the Tour de Rock, rolled into Maffeo Sutton Park to meet with the members of the community and raise money to fight childhood cancer.

During the stop, Eastmure shaved her head to raise money and show her support for cancer patients. The community event was just one of a handful of stops in the Harbour City for the riders, who began their 1,100-kilometre ride from Port Alice last week.

“It was just huge to see so much support from the community,” Eastmure said. “That was unbelievable, being in what is now my hometown – that meant a lot to me.”

Among the more than two dozen individuals on stage cheering on Eastmure was Natalie Prowse, 12, a junior rider and cancer survivor.

Prowse says she is proud to be a part of the event and to see so many supportive people.

“It is really amazing,” she said.

There were a few factors that led to Eastmure deciding to ride in this year’s Tour de Rock.

“I had a dear friend of mine who passed away to cancer,” Eastmure said. “One of my colleagues did the ride in 2013 and that really inspired me. This year everything fell together and it was the perfect timing to do it.”

Eastmure says each community event on the ride provides her with the opportunity to slow down, live in the moment and connect with the individuals she meets.

“People have gone out of their way to meet you and talk to you and they have something important to say,” Eastmure said. “It is important …  to savour that moment.”

Despite clear skies on Monday, the weather last week was mainly cold and rainy in the North Island, but Eastmure says it didn’t dampen the spirits of the riders.

“We had really some really super windy cold days, but the team did not complain once,” Eastmure said.

Eastmure is currently fighting a cold, but refuses to let it slow her down or hinder her perspective on the ride.

“You just suck it up and it is nothing like going through chemo,” Eastmure said. “Our hardest day on tour is a cakewalk for someone fighting cancer.”

The Tour de Rock will conclude its ride in downtown Victoria on Thursday. To view the team’s schedule, please visit www.tourderock.ca/upcoming-events/.