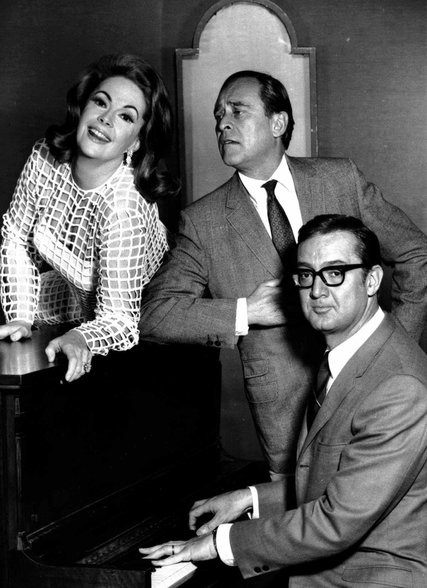 Steve Allen, at the the piano, rehearsing with his wife, Jayne Meadows, and Louis Nye for “The Steve Allen Comedy Hour” on CBS in 1967 in New York City. Credit Bon Wands/Associated Press

Jayne Meadows, a glamorous redheaded actress who starred on Broadway, in the movies and on television, but who was probably best known for her 46-year role as Steve Allen’s wife, business partner and frequent co-star, died on Sunday at her home in Encino, Calif. She was 95.

Her son, Bill Allen, confirmed her death on Monday

Ms. Meadows was never as well known as her younger sister, Audrey, who played Alice Kramden on the now-classic Jackie Gleason sitcom “The Honeymooners.” But she was a versatile and accomplished actress in her own right and a familiar presence on television for years, in dramatic productions, prime-time series and game shows.

She was born Jayne Meadows Cotter on Sept. 27, 1919, in Wuchang, China, where her father, Francis James Meadows Cotter, and her mother, the former Ida Miller Taylor, were Episcopal missionaries. The family moved back to the United States in 1927, and her father eventually became rector of Christ Church in Sharon, Conn. After attending a girls’ boarding school with her sister, she went to New York to be an actress.

STORY HAS BEEN TRUNCATED, TO GET TO THE NOTEWORTHY ASPECTS OF MS. MEADOWS’ CAREER

…..She had become more of a television fixture than a stage or film actress. Game shows were a specialty: She was a regular panel member on “I’ve Got a Secret” from 1952 to 1959 and a frequent guest on “What’s My Line?,” “Password” and other shows. She also acted in many of television’s classic drama programs: “Hallmark Hall of Fame,” “Studio One” and “General Electric Theater,” among others. From 1969 to 1972 she was a cast member on the hospital drama “Medical Center” with Chad Everett.

Ms. Meadows was best known for her work with Mr. Allen, the comedian, songwriter and talk-show host, whom she married in 1954. Beginning with the original “Tonight” show, which he created, Mr. Allen was the host of several shows in the 1950s and ’60s, and she appeared on all of them.
.
READ THE COMPLETE