San Francisco pioneer radio station KPO (later KNBR) went on the air from the 6th floor of Hale Bros. Dep’t Store.  It began with a power of 50 watts at 833 khz.

In 1933, backed by the On the Trail portion of the magnificent Grand Canyon Suite, Johnny Roventini, pillbox hat and all, uttered the words “Call for Philip Morris” for the first time on radio. The famous phrase was said in perfect B flat pitch and tone to perfectly match the accompanying music. This “Call for Philip Morris” phrase became one of the most famous in all of advertising.

In 1935, after 15 months on Chicago radio station WENR, Longtime host/producer/director Arch Oboler did not take over the program until a year later.

In 1950, Tony Bennett made his first recording, “Boulevard of Broken Dreams.” Bennett had used the song, from the 1934 movie “Moulin Rouge,” to audition for Columbia Records. The record began Bennett’s 40-plus years with Columbia. His first #1 hit the following year was “Because of You.” 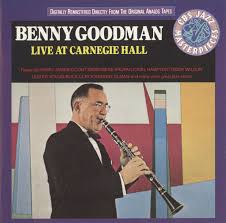 In 1953, Benny Goodman returned to Carnegie Hall after 15 years.

In 1956. The Platters were in New York for two days of recordings for their first Mercury LP. Among the ten tracks completed were two of the group’s next hit singles, “My Prayer” and  “I’m Sorry.”

In 1960, rock ‘n’ roll singer Eddie Cochran died of severe head injuries suffered in a single vehicle car crash, while enroute to the London airport following a tour of the UK. The other passengers, rocker Gene Vincent and Cochran’s fiancee, Shari Sheeley, were seriously injured. Cochran was only 21, and had just begun to realize his potential. His two biggest hits were 1957’s “Sittin’ in the Balcony” and 1958’s “Summertime Blues.”

Also in 1960, the Easter Sunday edition of CBS-TV’s Ed Sullivan Show featured Mahalia Jackson singing “Old Rugged Cross” and “Were You There When They Crucified My Lord?”Roberta Sherwood and her sons performed an “Easter Parade” medley. David Seville andThe Chipmunks had an exploding Easter basket, and Canada’s Wayne & Shuster‘s timely skit was about filing income taxes.

In 1961, the 33rd Annual Academy Awards ceremony, hosted by Bob Hope, saw Best Picture honors go to “The Apartment,” for which Billy Wilder was named Best Director. Burt Lancaster took the Best Actor honors and Shirley Jones, the Best Supporting Actress, for their performances in “Elmer Gantry.” Elizabeth Taylor was voted Best Actress for her role in “Butterfield 8.”

In 1964, the Rolling Stones‘ self-titled first album was released in Britain. It sold more than 200-thousand copies and topped the British chart for 12 weeks.

Still in 1964, the FBI lab announced that the lyrics to “Louie Louie” were “officially unintelligible.” The investigation began as a result of a widespread rumour that the Kingsmen’s hit song was pornographic.

In 1965, RCA and the LearJet Corporation announced the development of the combination 8 track tape player and car radio that would become available in new cars later that year. 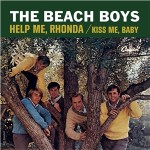 Also in 1965, the Beach Boys’ “Help Me Rhonda” was released on the Capitol label. It would become their second #1 pop single after “I Get Around.”

In 1966, CBS-TV’s Ed Sullivan Show featured Petula Clark singing “Sign of the Times, and The Animals performing “Don’t Bring Me Down.”  Also appearing were comedians Jimmy Durante and Myron Cohen, opera stars Dorothy Kirsten and Franco Corelli, plus a dance team and a contortionist.

In 1967, comedian Joey Bishop got the opportunity to try to unseat the king of late night, Johnny Carson. The Joey Bishop Show made its debut on ABC-TV this night. Bishop, Regis Philbin (announcer) and Johnny Mann (music) couldn’t beat Carson, but held out until September 26, 1969 (the show’s last broadcast).

In 1969, the Winterland Ballroom in San Francisco was the site of the first solo concert by The Band – Bob Dylan’s former backing group.

In 1970, the breakup of the most influential rock group in music history was official when Paul McCartney‘s solo LP, McCartney, was released. Paul played all the instruments himself on this Apple album.

Also in 1970, at the White House, Johnny Cash refused to perform “Okie from Muskogee” at President Nixon’s request because it wasn’t his song, the country hit was by Merle Haggard. Cash performed “A Boy Named Sue” instead.

In 1971, London Ont.-born saxophonist and singer Carmen Lombardo succumbed to cancer in Miami at age 67. He performed with his older brother Guy Lombardo’s Royal Canadians from the band’s beginnings in 1923 until 1970. Carmen Lombardo was also a prolific songwriter, providing the Royal Canadians with such hits as ”Coquette,” ”Sweethearts on Parade” and ”Boo-Hoo.”

In 1972, “Betcha by Golly, Wow,” by The Stylistics from Philadelphia, earned a Gold Record for the group. The Stylistics also scored million sellers with “You are Everything,” “I’m Stone in Love with You,” “Break Up to Make Up” and “You Make Me Feel Brand New.” The smooth R&B group could have won an award for the most creative use of the words, Betcha, by Golly, Wow, too, if anyone had thought about it…

In 1973, The Eagles released their second studio LP “Desperado.” The concept album was based on the activities of the Dalton gang and the Old West, and was recorded in the UK.

Also in 1973, “The Dark Side Of The Moon” by Pink Floyd was certified as a Gold Record. 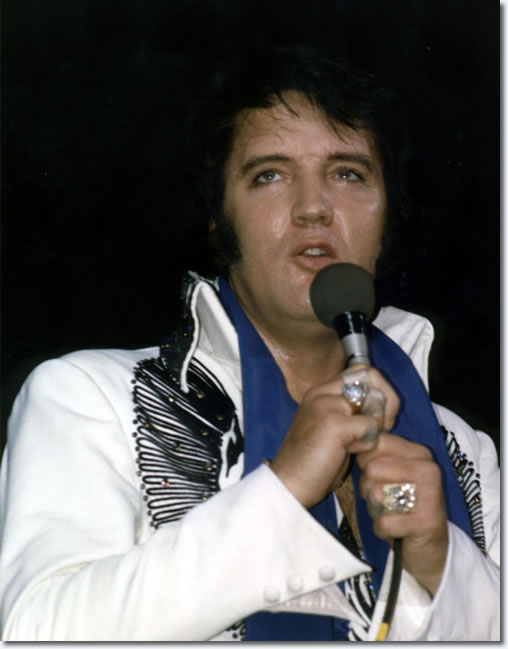 In 1975, Elvis Presley bought a Convair 880 jet formerly owned by Delta Airlines for $250,000, then spent $600,000 refurbishing it to include personal quarters, a meeting area and a dance floor.

In 1977, Led Zeppelin fans stormed Miami’s Orange Bowl in a riot over tickets.

In 1979, the No. 1 Billboard Pop Hit was “Knock on Wood” by Amii Stewart. The single was a disco rendition of Eddie Floyd’s song.

In 1980, reggae musician Bob Marley (below) played at Zimbabwe’s Independence Day ceremonies, later calling it the greatest honour of his life. A little more than a year later, Marley was dead of brain and lung cancer.

In 1982, NBC-TV’s Saturday Night Live was hosted by Johnny Cash, who sang “Ring Of Fire”, “Folsom Prison Blues”, “I Walk The Line” and “Sunday Morning Coming Down”.  The musical guest was Elton John, who performed “Empty Garden” and “Ball And Chain”.

In 1983, music producer Felix Pappalardi was shot and killed by his wife in New York City. He was 44. Pappalardi’s first claim to fame was as a producer for the Youngbloods, Joan Baez and Cream. He later became bass guitarist for the heavy metal group Mountain, which had a 1970 hit with ‘Mississippi Queen.”

In 1985, many fans of the TV soap opera, Days of Our Lives, lined up in Hollywood, in hopes of getting the hottest tickets in town — for the wedding of Bo and Hope on the popular soap. It was the first soap wedding open to fans.

In 1986, a truck containing equipment belonging to the Canadian rock band Honeymoon Suite was stolen in New Jersey. They had to borrow instruments from the group Heart to play their next gig. When the truck was finally recovered, only Honeymoon Suite’s costumes and drum kit remained.

Also in 1986, the Warner Bros. album The Very Best of the Everly Brothers was certified as a Gold Record.

In 1987, Carlton Barrett, drummer for Bob Marley’s backup group, the Wailers, was shot and killed outside his home in Kingston, Jamaica. Barrett’s widow, her lover and another man were charged with murder, but were convicted only of conspiracy and sentenced to seven years.

Also in 1987, NBC aired the final episode of “Remington Steele.”

Still in 1987, Bruce Hornsby and the Range entertained an estimated 60-thousand people at a free beach concert in Pensacola Beach, Florida. Officials say the crowd was well-behaved, contrary to predictions by residents who wanted to ban the annual Spring Break bash.

Also in 1991, Nirvana (below) performed “Smells Like Teen Spirit” in public for the first time, during a concert at the OK Hotel in the Pioneer Square area of Seattle.

In 1992, rapper Luther Campbell of 2 Live Crew cancelled an appearance at an Omaha, Nebraska record store because of threats allegedly phoned into the Miami office of his record company. Campbell had planned the visit to protest censorship of the group’s music. Police said they had no reports of any threats.

In 1994, NBC newsman Peter Hackes,(HACK-us) who also had a dramatic role in the bigscreen movie Broadcast News, suffered a fatal heart attack at age 69.

In 1997, the British rock group Bush and Canadian guitarist Dominic Troiano settled a dispute over the right to use the band’s name. Bush had been forced to add an “X” to the end of their name in Canada because Troiano had legal rights to the Bush moniker. Bush was the name of a group that Troiano had led in the early ’70s. As part of the settlement, the British band donated 40-thousand dollars to charity.

In 1998, Linda McCartney, the wife of former Beatle Paul McCartney, died of breast cancer at age 56 on a family-owned ranch near Tucson, Arizona.  Photographer Linda Eastman had met Paul at the 1967 London launch of the Beatles’ “Sergeant Pepper” album. They married two years later. Following the Beatles’ breakup, Linda joined her husband’s new band, Wings, as a keyboards player and backing vocalist.

Still in 1998, all 13-thousand tickets for the Spice Girls‘ first New York City appearance were sold in 12 minutes.

In 2000, singer Gloria Gaynor sang her hit “I Will Survive” on this week’s  episode of Fox-TV’s “Ally McBeal.” The writers adopted the song title as the name of the episode.

In 2002, Tammy Wynette‘s four daughters settled a lawsuit out of court with the country star’s doctor.  The daughters had pursued an action claiming that the Pittsburgh doctor had contributed to Wynette’s 1998 death.

Also in 2002, it was announced that the final episode of FOX’s “Ally McBeal” would air on May 20.

Still in 2002, the Academy of Television Arts & Sciences board voted unanimously to urge networks not to get rid of credits at the end of TV shows.

In 2004, Kurt Cobain‘s Mark IV-style Mosrite Gospel guitar sold for $100,000 at the Icons of 20th Century Music auction held in Dallas. A piano Elton John and Bernie Taupin used in their song-writing sold for $140,000.

Also in 2004, ABC News reported that AC/DC’s “Shoot To Thrill” was among the rock tracks played by U.S. Marines in Fallujah, Iraq, to rattle Iraqi insurgents.

In 2007, Kitty Carlisle, widow of Broadway playwright Moss Hart, Broadway and film actress, singer and arts advocate, died in New York at age 96.  Kitty was a long-time panelist on TV’s To Tell the Truth, and was a semi-regular on Password, Match Game, Missing Links, and What’s My Line.

In 2009, 83-year old country music star Ferlin Husky was hospitalized in Springfield, Missouri, with congestive heart failure and pneumonia. He was released that July, but his heart gave out 20 months later.

In 2011, Canadian actor Michael Sarrazin succumbed to cancer in Montreal at age 70. As well as many bigscreen successes in his 45 year career he starred in the 1973 TV movie “Frankenstein: The True Story,” and the Toronto-based 1999 series “The City.”  His unique pair of soulful eyes added dramatic intensity to any scene he was in.

In 2013, Aerosmith’s Steven Tyler and Joe Perry received the ASCAP Founders Award during the 30th annual Pop Music Awards at the Loews Hollywood Hotel. “To be recognized by ASCAP with the Founders Award is a huge achievement,” Tyler said in a statement.

Singer-guitarist Pete Shelley of The Buzzcocks is 60.

Actor Carlo Rota (Little Mosque on the Prairie, Jane the Virgin) is 54.

Actress Lela Rochon (The Wayans Bros., The Division) is 51.

Actress Leslie Bega (Head of the Class) is 48.

Actress Jennifer Garner (Alias, Time of Your Life) is 43.

Singer Victoria Beckham of the Spice Girls is 41.

Actress Lindsay Hartley (Days of Our Lives, All My Children, Passions) is 37.