Pepper and Dylan are fragged, their lieutenants missing in action; Lochlin Cross and his belovedLoc’r Room are history. These are just some of the recent casualties in the Radio Wars of Edmonton. There may be more.

It sucks to get fired, to get escorted out of the building, to be told you don’t fit the new direction when what it really means is that your ratings are low, to have your very existence stricken from the official online record, but change is part of the cycle of radio life. Without change, radio stations grow stale, tired. They do anyway. The quaint idea of getting music and amusing banter free on any wireless set is already under attack from the invasion of new media.

“Stop listening to our radio station right now and go to our Facebook page!”

All major radio personalities know their days are numbered from the moment they take a radio job that puts their personalities on the line. It takes courage. Only the toughest and most talented thrive. Most of the fired get new jobs, and if they’ve become famous in one market like Edmonton tend to stick around – unless they want to start at the bottom again. In the radio hierarchy, you “work your way up” from midnights to the top spot on the front lines: The Morning Show. 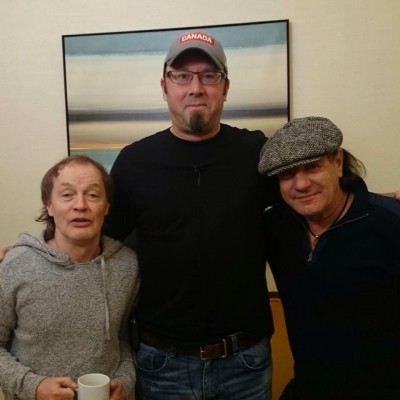 Lochlin Cross (the tall one, pictured) is one of the lucky ones. In a planned move, he says, after five years at The Bear 100.3 FM, the 45-year-old announcer starts his new gig as morning man on CRUZ 95.7 FM in May, partnered with soon-to-be-former Global TV meteorologist Nicola Crosbie. Cross says his show will be similar to theLoc’r Room on the Bear – which he calls “a morning show in afternoon drive” – with a focus on “genuine” moments and real conversation. The content may be a bit tamer than his fans are used to.

“You’re appealing to a different audience,” he says. “I’m not going to be able to get away with Ass Crack Shoe Rack videos.” (Don’t ask. Just click the link, if you dare.)

“It’s been a pretty tangled path,” McCord says. Funhouse with McCord starts Monday from 3-7 pm on the Bear. 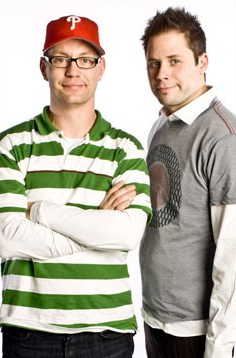 The current whereabouts of Pepper and Dylan (left), meanwhile, are unknown. The Virgin 104.9 FM radio morning duo was fired suddenly on March 11, along with their two sidekicks Lamya Asiff and “Robbie the Intern.” In a Facebook post, announcer Rob Pepper wrote, “As disappointed as I am to not be working right now, I want everyone to know that there is no bad blood. Sometimes decisions are made to take things in different directions. Dylan, Lamya, Robbie and myself were not part of the new direction. That’s all.” He also talked about “that awful moment” when they were given the bad news and, one assumes, immediately escorted out of the building.

Cross knows the feeling. His first job in Edmonton, program director at K-Rock – now K-97 – ended after 18 months with him getting fired. Usually, he says, it’s a “performance issue.” As talented and tough as they are, Pepper and Dylan got hammered in the recent ratings, their morning show ranking No. 12 of 15 reporting stations with the 18+ crowd, well behind the top morning shows like Sonic’s bulletproof Garner Andrews and NOW! Radio’s Crash and Mars. Something had to be done. At least when sports teams lose, they fire the coach.

Edmonton has 25 FM stations, at least six of which play Katy Perry. It is one of the most competitive markets in Canada.

Knowing all this doesn’t make it any easier to be a radio guy, says Cross, whose career path looks like the routing for a cover band on the B circuit: Edson to Fort McMurray to Prince George to Winnipeg to finally Edmonton in 2006.

“It’s not easy getting fired,” Cross says. “It takes a toll on you. In this business, you have to have a bit of an ego and with that comes a variety of personality traits, and getting fired really beats you up.” Even if it’s planned, it still hurts. He gave his notice to the Bear at the beginning of March. “I’ve been waiting three weeks for them to walk me out. So this was a relief.”

CRUZ needs to do something, too. Dead last in the ratings, the station is in its third flip as a classic rock station (that inexplicably slips in songs by Wang Chung), having previously tried light rock as Lite FM and God-knows-what-format in its first incarnation, The Sound.

Cross knows he could be an asset. “They’ve been going through so much change. This is just another example of more change,” he says. “I’ve got a lot of hard work ahead of me. It’s going to take some time to repatriate some people back to that dial position, but I think we can put on a decent show. And the one thing I’m good at is getting out there and putting out a consistent product. I think over time I will have an impact on the market. And with Nicola’s help – she’s one of the top five most recognized media personalities in the city, so I don’t think that was a bad move for them, either.”

Virgin has yet to announce a new morning show. Cross says he would bet “a large sum of money” that Pepper and Dylan – a local radio presence for most of the 2000s – will wind up on another Edmonton radio station.

Until Cross and Crosbie take over in May, the CRUZ morning spot will be occupied by veteran Edmonton radioman Gary James, now working without McCord’s former partner Ryann Bradley, who has also had a mutual parting with CRUZ. Makes your head hurt.

Cross says, “This business is nuts.”