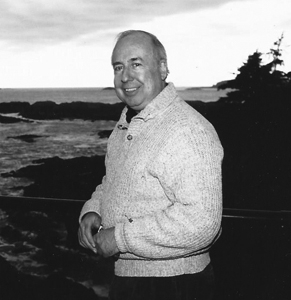 Born in Vancouver 20 May 1942; passed away 18 November 2014 at home in Victoria. Ron was a loving father to Alan S. Thompson and W. Sarah de Turberville (née Thompson) and is survived by his wife of 39 years Penelope Thompson (née Owen), grandchildren Linus Scott, Oliver Scott and Lotus Thompson and younger brothers Norman Thompson and Gordon Thompson of Ontario.

Ron graduated from the University of British Columbia’s Radio Television and Media program in 1963 and worked for the Canadian Broadcasting Corporation from 1961 until 1985. Ron worked at CHEK television news and as a freelance cinematographer, then in 1990 finished off his career working for BCTV news. Ron was acting President of the Press Gallery Association of Victoria for many years. An accomplished cinematographer, Ron worked on several motion pictures. Ron had some amazing stories to tell about the people he came to meet through his work. During his career, Ron travelled through China, the Philippines, Japan, Europe, Canada and the United States.

Away from work, he was an enthusiastic gardener – and a volunteer gardener at Government House. He enjoyed reading, fishing and sailing in Swiftsure. He was also very proud of the accomplishments of his children and grandchildren.

Ron struggled with addiction throughout his life, along with its attendant mental health issues. Ron wished to express his gratitude to the professionals who provided care and his family who provided tremendous support the last few years and did so with grace, patience and great fortitude.

A memorial service will be held at First Memorial, Fort St., on Feb. 5, 2015 at 2pm. In lieu of flowers, donations may be made to the Capital Mental Health Association. Ron would have urged all of us to take a compassionate approach to mental illness and addiction. In his own words: “He worked, played and fought without care during the early seasons of his life, then mellowed to a thoughtful gentleness with the coming of Fall. Years gathered upon his strong shoulders as leaves upon the ground. Many love filled years passed before he lived his last season and his shoulders bowed beneath that undeniable weight.”