In 30-plus years of TV his signature role was Dr. Bellows on I Dream of Jeannie.  He also had running parts in the series Dr. Kildare and Mr. Adams & Eve.  He died from multiple myeloma Aug. 19 1987, at age 76.

On this day in 1917, actor Robert Bray was born in Kalispell Montana. He played Corey for 5 years on TV’s Lassie, but his specialty was western roles which he played in movies & on TV for more than 20 years.  He died at 66 March 7 1983 after a heart attack.

actor James Daly was born in small town Wisconsin. Although best known today as the father of actors Tim and Tyne Daly, he had his own impressive resume, including 20 years starring in the early syndicated TV series Foreign Intrigue.   He also was the lead in the CBS series, Medical Center.  Daly died of heart failure, July 3, 1978 aged 59.

On this day in 1922, actor Frank Sutton was born in small town Tennessee.

He is best remembered as Sgt. Carter on ‘Gomer Pyle USMC’, and as Joe Sullivan on the soap opera ‘The Secret Storm’.  He died June 28 1974 at age 51, after a heart attack.

Also this day in 1922, actress Colleen Gray was born in smalltown Nebraska.  She appeared in episodic television over 35 years, notably as Mrs. Clifford in the series McCloud, with another running role in Bright Promise.  Happy 92nd, Colleen!

On this day in 1925, Johnny Carson was born in Corning Iowa. 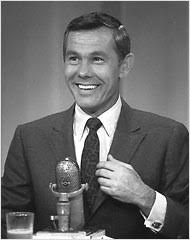 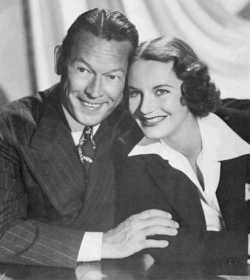 comedian Fred Allen made his radio debut.   His wife, Portland Hoffa, joined him on the CBS radio broadcast. Allen’s comedy-variety program was known as The Linit Bath Club Revue. It then became The Salad Bowl Revue, then The Sal Hapatica Revue, The Hour of Smiles, Town Hall Tonight, The Texaco Star Theatre and finally, The Fred Allen Show, for a total of 17 years, about 12 of them on NBC.  He also co-starred on NBC Radio’s The Big Show (1950-52.) Allen was never able to transition his brand of humour to TV, though he was a regular on the panel of CBS-TV ‘s What’s My Line.

On this day in 1938, the first major Canadian broadcast heard around the world consisted of our singers and orchestras producing ‘A Musical Portrait of Canada.’

CNN newsman John Holliman was born. He was indelibly etched in our memories as one of the ‘Boys of Baghdad’ during that remarkable CNN audiocast from an Iraqi hotel room as the 1991 war was beginning.  Holiman was killed in a car crash in Georgia Sept 12, 1998.  He was 49.

On this day in 1950,  LIFE magazine was adorned with a cover picture of Ed Wynn, and the caption, “TV gets top comics.” 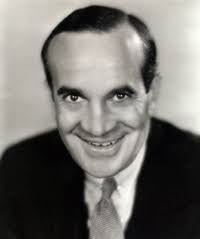 “The World’s Greatest Entertainer” (a billing he gave himself), Al Jolson (Asa Yoelson), died at the age of 64 following a heart attack.  He had his own high budget radio shows (Shell Chateau in the 30’s, Kraft Music Hall in the 40’s) and was a frequent guest on other radio variety shows.

On this day in 1956, Jonathan Winters became a TV star. Winters was seen coast to coast on NBC in the first videotape recording to be broadcast. The taped show originated at WRCA-TV in New York City. 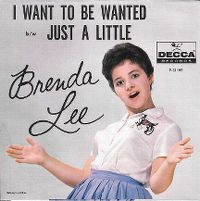 On this day in 1961, “Runaround Sue” by Dion was the #1 U.S. single. It remained at the top for two weeks until being knocked off by Jimmy Dean’s Big Bad John.

On this day in 1962, Steveland Morris Judkins, soon to be known as Little Stevie Wonder, at the age of 12 recorded his first single. The song was titled “Thank you for Loving Me All the Way.”

On this day in 1963, The Beatles recorded “I Wanna Be Your Man,” on which Ringo Starr was the lead singer.

On this day in 1964, as his “Last Kiss,” with lyrics detailing a fatal car crash accident was gaining popularity J. Frank Wilson was severely injured (and the record’s producer killed) in an MVA while en route to a gig at Canton, Ohio.

On this day in 1966, the Jimi Hendrix Experience had their first recording session in London, where they taped their first single”Hey Joe.” It would be a Top Ten hit in the UK.

peaked at #8 on the Billboard pop singles chart.

That same day in 1971, The Who’s rock opera “Tommy” finally dropped off the LP charts after a two and a half year run.

On this day in 1973, the No. 1 Billboard Pop Hit was “Midnight Train to Georgia” by Gladys Knight & the Pips.

Also in 1976, Led Zeppelin made their debut on US television as guests on Don Kirshner’s Rock Concert.  They played ‘Dazed and Confused’ and ‘Black Dog’.

On this day in 1978, CBS Records hiked the price of many vinyl LP’s by one dollar to $8.98. Other labels soon joined in.

Still this day in 1978, Maybelle Carter, the matriarch of the musical Carter family, lost her battle with Parkinson’s disease.  She was aged 69.

Maybelle was the mother of June Carter, who became Mrs. Johnny Cash. Maybelle Carter was 69.

Still in 1978, Toronto rocker Neil Young‘s beach house in Zuma Beach Calif. burned to the ground in a forest fire.

On this day in 1980, the No. 1 Billboard Pop Hit was “Woman in Love” by Barbra Streisand. The single appeared on the album “Guilty,” which sold more than 20 million copies worldwide.

On this day in 1982, baritone Hoyt Hawkins of the Jordanaires, the singing group who accompanied  Elvis Presley, Patsy Cline and Ricky Nelson on many of their hits, died at age 55. 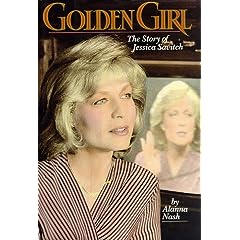 NBC newscaster Jessica Savitch drowned at age 36. She had been a passenger in a car that crashed and flipped into a canal in New Jersey.

On this day in 1984, “NBC Nightly News” aired BBC footage of the severe drought in Ethiopia, a first for North American audiences.

On this day in 1990, the Canadian heavy metal group Rush released their ‘Chronicles’ video.

On this day in 1994, actor Robert Lansing lost his battle with cancer at age 66. 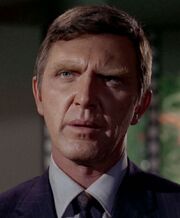 He is pictured as Gary Seven in an episode of Star Trek.  Of the several series he starred in, Twelve O’Clock High & The Equalizer were the most highly regarded.

Also this day in 1994, a working reporter who worked his way up to be head of CBS News, William Leonard died of a stroke at age 78.

On this day in 1995, former Selena fan club president Yolanda Saldivar was convicted of murdering the Tejano star outside a Texas motel six months earlier. The jury deliberated only 2 1/2 hours before handing down their guilty verdict.

Also in 1995, Def Leppard pulled off one of the greatest publicity stunts ever when they played three concerts on three different continents in the same day. The band played in Tangiers in Africa in the morning, in London in the afternoon and at the Pacific Coliseum in Vancouver in the evening.

On this day in 1999, the Rob Thomas/Carlos Santana collaboration, “Smooth,” was the #1 single in North America. The track was recorded for Santana’s comeback album, “Supernatural.” With lyrics by Thomas, the songs stayed #1 for an impressive 12 weeks.

On this day in 2002, a Michigan appeals court reversed the 1999 decision against TV’s “Jenny Jones Show.” (Jenny Jones, pictured.) The court ruled that the program had no legal duty to protect a guest who was murdered after revealing a gay crush. Scott Amedure was shot to death by Jonathan Schmitz in 1995, three days after Amedure revealed an attraction to Schmitz during a taping of the show in Chicago. The segment was never aired.

Also in 2002, a federal judge in St. Louis dismissed a lawsuit against Chuck Berry by Johnnie Johnson, a piano player and former collaborator who wanted royalties for more than 30 songs written between 1955 and 1966.

On this day in 2004, opera singer Robert Merrill, who made his first of many TV appearances on NBC’s “Saturday Night Revue” in 1949, died at age 87. 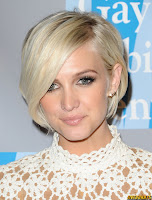 after the wrong vocal track was played during her performance on “Saturday Night Live,” which revealed she was lip-synching.

On this day in 2005, in Chicago, Lou Rawls sang the Star Spangled Banner before Game 2 of the 2005 World Series between the Houston Astros and Chicago White Sox. It would be his last public performance as Rawls lost his battle with brain and lung cancer 2½ months later.

On this day in 2006, The Killers appeared on CBS’ Late Show With David Letterman to promote their “Sam’s Town” CD.

Also in 2006, The Eagles performed at a party for Wal-Mart CEO, Lee Scott, at New York’s Rockefeller Center. This was two days before they signed a deal giving the discount retailer exclusive rights to put out future recordings and other releases from the band.

On this day in 2007, Carlos Santana tracks were showcased on the CBS TV drama ‘Cane’ starring Jimmy Smits.

Also in 2007, Phil Spector‘s first murder trial over the 2003 death of actress Lana Clarkson ended in a hung jury. Ten jurors had voted him guilty, but the other two insisted on acquittal.

On this day in 2009, Toronto-born character actor Lou Jacobi, whose memorable face appeared in almost 40 years of television episodes, died at age 95.

On this day in 2010, the surviving members of Buffalo Springfield – Neil Young, Stephen Stills and Richie Furay – reunited for their first concert in 42 years at the Bridge School Benefit in Mountain View, CA. Young’s Bridge School concerts raise money for students with severe physical handicaps.

On this day in 2012, Guns N’ Roses frontman Axl Rose had his first sit-down, live television broadcast interview in more than 20 years on ABC-TV’s Jimmy Kimmel Live! Rose was promoting GN’R’s 12 show residency at The Joint in Las Vegas.

Also in 2012, Bruce Springsteen put on a free concert in support of President Obama’s reelection campaign in Charlottesville Virginia. “We’re still living through very hard times, but justice, equality and real freedom are not always a tide rushing in,” said Springsteen. “They are more often a slow march, inch by inch, day after long day.”

On this day in 2013. Bill Mazer, who was a voice and face of sports coverage in New York for decades, pioneering sports-talk radio and becoming a television fixture while earning the nickname “the Amazin’” for his encyclopedic recall of sports facts and figures, died at age 92. When Mazer retired in 2009 (aged 88) he had spent 60 years in broadcasting, 20 of them at WNEW-TV.

Also in 2013, original KISS members Ace Frehley and Peter Criss appeared on stage together for the first time in 13 years during the all-star jam at the 30th-anniversary party for Eddie Trunk’s WNEW radio show at the Hard Rock Café in New York City.

Actor Warren Burton (Valley of the Dolls, Santa Barbara) is 70.

Country singer/actor Dwight Yoakam (Under the Dome) is 58.

TV host Cat Deeley (So You Think You Can Dance) is 38.

Actor Robert Belushi (How I Met Your Mother, The Joe Schmo Show, According to Jim) is 34.

Actress Taylor Spreitler (Melissa & Joey, Days of Our Lives) is 21.

Actor Zach Callison (Sofia the First, Diary of a Single Mom) is 17.

1969
I Can’t Get Next to You – The Temptations
Hot Fun in the Summertime – Sly & The Family Stone
Suspicious Minds – Elvis Presley
Since I Met You, Baby – Sonny James