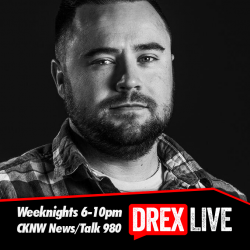 He’s terribly engaging and affable, as well as biting and scathing.

His real name is Justin Wilcomes, but he’s better known as Drex. He’s just started the regular evening time slot at CKNW, with his program Drex Live. It’s quickly getting quite the following.

Joseph Planta is quite simply one of the best interviewers working today, and he has been for quite a few years now. Far-ranging and ubiquitous in his tastes, he is always deeply researched and versed in the world of the person at the other end of the microphone – David Berner