On Friday, Canadian Broadcasting Corp. executives told the federal regulator it is time to turn off free signals and allow conventional TV stations such as CBC and CTV to charge distributors a fee for carrying their channels in basic packages – even if that cost is passed on to customers.

The CBC’s argument echoes arguments BCE Inc. presented earlier this week before the Canadian Radio-television and Telecommunications Commission (CRTC), which is holding a major two-week hearing into the future of Canada’s television industry, called Let’s Talk TV. Both companies argued local television is suffering and unsustainable under current rules, after the CRTC floated a proposal to allow local over-the-air signals to be shut down. (BCE owns 15 per cent of The Globe and Mail.) 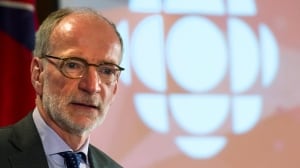 “Conventional television still remains at the heart of the broadcasting system, but its business model is broken,” Hubert Lacroix (pictured), president and CEO of the CBC, told the Commission.

The notion that CBC’s channels could be restricted only to those with a cable, satellite or Internet subscription raises fundamental questions about a publicly funded broadcaster’s role and the rights of over-the-air viewers, many of whom live in remote areas and have low or fixed incomes.

The CRTC’s own analysis of thousands of submissions ahead of the hearing suggests Canadians still value over-the-air signals, even though only about 5 per cent still access them, through antennas. Chairman Jean-Pierre Blais pressed the CBC about how it would explain to viewers that they would have to pay $25 to $30 a month to subscribe to cable or satellite to keep CBC TV, when many see free access to public broadcasting “as almost a constitutional right.”

“It’s not free” to produce, replied Steve Guiton, CBC’s vice-president of technology and chief regulatory officer, “and it’s been funded by a specific model, which is advertising.” He used Via Rail Canada Inc. and public transit as examples of services that are similarly heavily subsidized by taxpayers.

The CBC earned about $331-million in advertising revenue in 2013, down more than 11 per cent from 2012, and a large part of that revenue will vanish this year after it lost NHL hockey broadcast rights to Rogers Communications Inc.