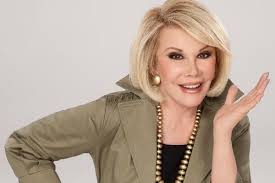 “No One Will Ever Call Michelle Obama A ‘Tranny’ Again“

“With the death of Joan Rivers at 81 Thursday, we lost one more icon in a dwindling breed: the comedian who does not seek the good opinion of the powerful media and entertainment elite.

“Just two months before her death, Rivers mocked President Obama as ‘gay’ and First Lady Michelle Obama as a ‘tranny,’ and caught hell for it from the likes of the Huffington Post. Those servants to power chided: ‘Rivers took her “jokes” too far yet again this week, when she hurled a trans slur at the first lady.’”

Nolte continued: “Now Rivers is gone and outside of a handful of comedic insurgents like Don Rickles, Dennis Miller, and Adam Carolla, we’re stuck with Politically Correct Palace Guards like Jon Stewart, Sarah Silverman, Stephen Colbert, Tina Fey, Will Ferrell, Lena Dunham, Ricky Gervais, the cast of ‘Saturday Night Live,’ and pretty much everyone associated with Funny or Die–all big government-loving cowards desperate to fit into a comedic class that believes political correctness is a virtue and those who buck it should be held up to ridicule.”

Nolte again: “Joan Rivers attacked everyone–from Michelle Obama to Sarah Palin. Whether you enjoyed her style or not, it was nice knowing that someone–someone!– was out there with the courage to invite the kind of outrage that causes a Huffington Post to accuse you of going too far.”

Nolte concluded his column saying, “Now Rivers is gone, and any up-and-comer who wanted to take her place, who dared call Michelle Obama a ‘tranny’ during open-mic night at the legendary Comedy Store, would be booed off the stage and blacklisted until she publicly recanted.

“No one will ever call Michelle Obama a ‘tranny’ again, and that is not a good thing, nor is it progress.”

See Nolte’s column: RIP Joan Rivers: No One Will Ever Call Michelle Obama A ‘Tranny’ Again

I wholeheartedly agree with Nolte on this one. I have said much the same thing many times. America’s political correctness knows neither left nor right. Republicans and Democrats, conservatives and liberals, Christians and secularists equally share the political correctness disease. But the media and entertainment industries are not only infected with the disease; they are carriers. And, with very few exceptions, they will even turn against their own in a heartbeat should someone touch the politically-incorrect “third rail.” If you don’t believe that, just talk to Mel Gibson or Alec Baldwin.

That most of Joan’s peers did NOT crucify her for her statement that Michelle Obama is a transvestite makes me tend to believe that they all know Joan told the truth and just didn’t have the courage to say it. Plus, she was JOAN RIVERS: the quintessential icon of the entertainment left.

My question is, what if Joan Rivers actually told the TRUTH about the Obamas? What if it’s true that Barack and Michelle (Or is the name Michael?) really are homosexuals, that Michelle really is a man, and that they have pulled off the greatest political hoax in the history of the United States? The timing of Rivers’ death is an incredible coincidence, if it’s not true. That is for sure.

Rivers went in for what would be regarded as simple out-patient surgery. How many millions of Americans have gone through this, and similar surgeries, without a hitch? Granted, she was 81. But she was a healthy 81. Granted, fluke deaths do sometimes happen during “simple” surgeries. But what a coincidence! The most iconic female comedian in the entire country accuses Michelle Obama of being a transvestite, and less than two months later, she is dead.

I realize that my good Christian brethren don’t like to think about this, much less discuss it, but there is absolutely no doubt that our federal government assassinates untold numbers of people all of the time. And I’m not talking about ISIS terrorists. I’m talking about American citizens. Can I prove it? Of course not. No one can–at least, not without risking becoming the next victim.

Think about it: if people inside our government could successfully carry out the assassination of President John F. Kennedy (and I’m sure they did), how difficult would it be to kill an entertainer, a political activist, or even a congressman? And what if the “dark” side of our government did have a hand in the events that occurred on this day back in 2001? Who inside the political and media establishments would dare to say anything about it–much less investigate it? Yes, this is another one of those politically incorrect “third rail” issues that no one wants to discuss. No one wants to believe that their own government–OUR own government–could be capable of the most despicably evil acts known to man.

But I am personally convinced that our CIA uses, not only their own agents, but highly secretive “dark” ops military personnel–even foreign assassins such as those who might be found in Israel’s Mossad and Great Britain’s SIS–to murder innumerable people whom they would consider “nuisances.” Yes, I said “dark” ops as opposed to “black” ops. “Dark” ops are highly-trained military troops or government agents who are either totally void of morals and scruples–or who are completely drugged out of their morals and scruples–and who are used by the “dark” side of government for the worst kind of murderous conduct.

For example, only the most gullible truly believe that Lee Harvey Oswald, and then the man who killed Lee Harvey Oswald, Jack Ruby (and how many others surrounding the Kennedy assassination), died in a sequence of spectacular “coincidences.” And I will always suspect that Congressman Sonny Bono’s skiing accident was no accident.

Does anyone not suspect that Marilyn Monroe was the victim of foul play? And if she was, the only people who had a motive to kill her were politicians in the highest places. And is there anyone who really doubts that Princess Diana was murdered by the “dark” side of the British Crown? I don’t.

Furthermore, I am thoroughly convinced that Gordon Kahl was the target of government assassins. And I suspect that the recent death of Edgar Steele may have been orchestrated and engineered.

Then there is Mary Jo Kopechne and Vince Foster. Anyone who believes the “official” reports on the deaths of these two people is intellectually challenged, to say the least.

The list of people who may have been killed by government assassins-or even by politicians themselves–is a very, very long one.

Then there are the deaths of people whose murders were so cleverly concealed they would not even make the “suspicious deaths” list. Truthfully, only God knows just how many American citizens have been assassinated by their own government.

But even worse than the probable killings of untold Americans by our own government is the fact that the vast majority of the American people (including Christian people) have no interest in knowing the truth. The vast majority of us are willfully ignorant. What was that that Edmund Burke said?

So many Americans (including Christians) have the Caesarean philosophy “might makes right.” As long as America is the world’s mightiest empire (we haven’t been a constitutional republic for a long time), we can do no wrong. The end justifies the means. Yeah, I know: Pastors preach against that philosophy in every other area of life–just not in politics. Most of them seem to believe that when it comes to government killings, there is no such thing as unjustifiable homicide. Plus, pastors and Christians haven’t given a second thought to “Just War” since World War II.
© 2014 Chuck Baldwin – All Rights Reserved

Chuck Baldwin is a syndicated columnist, radio broadcaster, author, and pastor dedicated to preserving the historic principles upon which America was founded. He was the 2008 Presidential candidate for the Constitution Party. He and his wife, Connie, have 3 children and 8 grandchildren. Chuck and his family reside in the Flathead Valley of Montana. See Chuck’s complete bio here.