Thanks to Broadcast Dialogue and today’s ‘Revolving Doors’ column for confirming the rumour that the PD/morning man at Eagle 97.3 Courtenay Bob Johnstone (pictured below)  is leaving to take on his new duties as morning man at Q103, Kelowna BC’s @Work Station.  In his new job he’ll be known as John Stone. 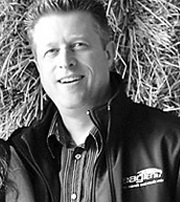 In Kelowna he’ll join former Victoria, Calgary and Ontario broadcaster Susan Knight for the newly titled “Big Breakfast with John and Susan.”  She has been holding down the morning fort solo for the past few weeks since a major bloodletting at the Pattison Kelowna cluster in June.