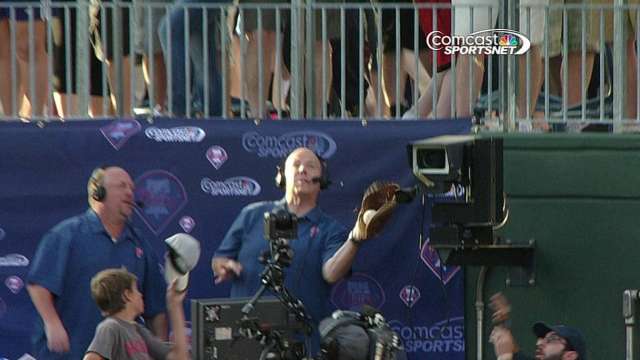 MLB announcers can usually be found in their broadcast booths, which tend to be halfway up the stands and directly behind home plate — in other words, prime foul ball territory. But an announcer ever catching a home run is an absurd notion and a complete impossibilty, right?

INCORRECT. Every once in a long while, broadcast teams venture elsewhere to call a game, like the Phillies announcers did on Friday from the center field bleachers. Every once in a shorter while, Freddie Freeman hits a home run in that direction. The two converged to produce the extremely improbable sight of Philadelphia announcer Tom McCarthy catching a home run ball, on the fly, in his first baseman’s glove while on the air:

To top it off, McCarthy played the role of the hardened bleacher denizen perfectly, throwing an opponents’ homer ball back:

Anyone want to bet on whether this will ever happen again?