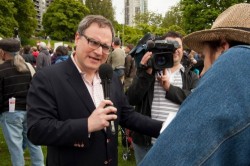 Andrew Weaver is an anti-oilsands extremist from Victoria, B.C.

He claims to oppose oil and gas – but he only criticizes oil and gas from Canada, not from OPEC giants like Saudi Arabia and Iran.

He claims to oppose oil and gas – but he loves to use oil and gas himself, jetting around the world, using fossil fuels for his very important life, while telling the rest of us not to.

He participates in foreign-funded, foreign-orchestrated smear campaigns against Canadian jobs, like when he mugged for the cameras with Neil Young, the millionaire American celebrity who jetted up to Canada to smear our oilsands. Young actually comparing Fort McMurray, Alta., to Hiroshima, while Weaver – who purports to be a scientist – just stood by and said nothing about that unscientific, vicious smear.

Weaver can dish it out. But he acts like a thin-skinned bully. God forbid you dare to criticize him – he’ll sue you. He’ll try to destroy you in court, by using our laws to silence you. It’s lawfare. It’s SLAPP suits – strategic litigation against public participation.

Weaver sued climatologist Dr. Tim Ball for, amongst other things, saying Weaver was “lacking a basic understanding of climate science,” according to a glowing New York Times article, cheering on his SLAPP suit.

Seriously? Suing someone, in a court of law, for saying you don’t understand global warming? This from a scholar, an academic, a teacher? And now a politician – an opposition politician, no less. Weaver is now a Green Party MLA in British Columbia, someone who hurls insults as part of his job description.

But it’s not just Dr. Ball. Last week, Weaver’s lawsuit against the National Post went to trial, for daring to criticize him back in 2009.

Nobody remembers those columns anymore. They surely haven’t damaged Weaver’s career – he’s a global warming celebrity, an international hero to the left, not just for his political views, but for suing those whose views he doesn’t like.

That’s not what true academics do. That’s not what politicians do – especially opposition politicians. Andrew Weaver is acting like a thug, not a scholar or a public servant. He is trying to censor and punish his enemies, not debate his opponents.

I wrote to Weaver and his lawyer asking, how does he pay for it all? A professor makes about $100,000 a year. An MLA in B.C. makes about the same. He’s not poor, but he’s not rich.

It’s hard to believe that a man earning about $70,000 dollars, after tax, can afford that. Is Weaver taking any money from environmental groups to silence Dr. Ball and the National Post? Is he taking foreign money, as so often is the case in Canadian environmentalism? (His lawyer has yet to respond.)

Weaver’s not alone. In the United States, Michael Mann, a global warming advocate, has sued Mark Steyn and National Review magazine, for criticizing his so-called “hockey stick” graph that is the basis of so much junk science.

The hockey stick graph was bad science. It was adjusted to make it look like global warming has been sudden and pronounced. Steyn called it fraud – not a criminal fraud, but fraud in the common usage of that word. That’s certainly fair enough in the rough and tumble debate that Mann voluntarily enters into every day himself as a global warming smearer. He’s always attacking someone, attacking someone. And, like Weaver, the one time someone criticizes him back, he rushes to court to censor his opponents.

Mann has claimed, repeatedly, that he won the Nobel Prize. But he didn’t — Mann was a contributor to the Intergovernmental Panel on Climate Change, which won the prize in 2007 — and he corrected that exaggeration only when Steyn embarrassed him about it.

These lawsuits are not really about a particular column in a newspaper or magazine. They’re about two big bullies – Weaver and Mann – who love to attack their enemies at will, not being man enough to take criticism themselves. Not being scholarly enough to engage in debate. Not being big boys enough to ignore the odd insult.

It’s about silencing of critics. Which is the best these eco-extremists have got.