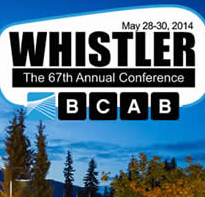 For more than 50 years, the BCAB has been recognizing the “Best in Province” for radio and television commercials, station imaging, community service and news reporting. Awards are presented to both large and small/medium market stations.

Congratulations to this year’s winners!

(Winners were announced at the 2014 conference.)

Friend of the Industry: Bruce Allen

Judges for this year’s awards:

CLIFF DUMAS
Cliff Dumas is a CMA, ACM and CCMA Award winning radio host and is the youngest broadcaster ever inducted into the Canadian Country Music Hall of Fame. He is a 2013 Mark Award Winner for Excellence in Broadcast Marketing. Cliff has written, co-produced and voiced close to 30 network shows including 18 Canadian Country Music Awards along with specials for Anne Murray, Terri Clark, Paul Brandt and countless specials for CMT. Cliff is currently V.P. of Operations for Good Life Networks and co-author of The Talent Whisperers communication course with Randy Lane.

TED FARR
Ted Farr has seen all sides of a radio station, from his early days as a newscaster and reporter, through his many years in senior management positions for broadcast heavyweights such as Rogers, Rawlco, Corus, WIC and Moffat. Ted has been a key developer of programming strategies throughout his career. He has an extensive knowledge and understanding of the News Talk format as well as music programming, networking and syndication. Ted’s reputation includes launching and nurturing many well-known Canadian radio personalities. Today he is a broadcast consultant and talent coach available through his website, www.tedfarrmedia.com

BRETT MANLOVE
Brett Manlove spent more than 27 years in Broadcasting; beginning at BCTV and moving through the ranks of Sales and Marketing Management up to Senior Vice-President of Sales for Canwest Television based in Toronto. Brett returned to BC in 2008 as Vice-President and General Manager of Global TV BC and in 2010 was the BCAB Broadcaster of the year.
He continues to committed much of his time to not for profit organizations including Variety the Children’s Charity and BC Children’s Hospital Foundation and is currently a trustee at the Webster Foundation. Brett has recently launched Vancouver Visitor TV, a specialized visitor TV channel running exclusively in key downtown Vancouver hotels.

STU MCNISH
Storytelling and in particular video storytelling has been Stu’s calling and passion. Stu is the founder of Oh Boy Productions in Vancouver; a full service video production house in Vancouver that has produced television shows, commercials and a wide range of videos for companies, government agencies and not for profit organizations.
Prior to starting Oh Boy, Stu was an award winning television reporter with BCTV’s (now Global) NewsHour.

JIM PATTERSON
Jim was President and CEO of TVB from February 1997 to the summer of 2007, following 32 years at the Canadian offices of three large international advertising agencies. He escaped from Toronto, moved to Stoney Lake (outside Peterborough) and launched his consultancy, View From the Duck Pond (marketing, strategy and communications). He’s active on volunteer community boards (music, live theatre, the environment, community services and politics). His clients seem to use a lot of broadcast. Jim always shows up whenever and wherever his four grandchildren ask.

THERESA TREUTLER
Theresa is President and CEO of the Television Bureau of Canada (since June 2007). Prior to this position, she was the Senior Vice-President, Media Director at Doner Canada for three years. She held senior vice-president positions at Starcom Mediavest and Starcom Worldwide Canada for five years. Theresa also spent 15 years of her advertising career at Leo Burnett in planning and buying roles across a broad spectrum of television advertisers.

“The Best” in BC broadcasting is recognized at the annual BCAB Conference. This prestigious competition is open to all members and associate members of the BCAB and celebrates outstanding achievement in several areas:

And don’t forget about the individual awards. These are free categories, so nominate a deserving someone (or more) from your station!

Here is a summary of each category and its requirements. Please indicate on your entry submission your market size. Large Market (Vancouver) or Medium/Small Markets (all others).

No more dubbing, packaging and paying for couriers – Awards of Excellence submissions are now accepted online.

HAVE QUESTIONS ABOUT THE BCAB AWARDS OF EXCELLENCE?