Today, we live in an electronic world. Most adults in the U.S. get their news and information from TV, radio and the internet. With the rapidly advancing technology, the TV and Radio industries have changed significantly in the past few years. This includes radio listenership, TV viewership, even the way advertising business is conducted.

There are many reasons why radio listening habits have changed so drastically, but the most compelling reason is TV news. Now, most every major TV station broadcasts news in the morning from 4:30 – 7am. The ratings of most all TV stations for morning news are very high. Simply translated, most adults are getting their news and information in the morning now from TV rather than radio.

As a result of the declining morning drive audiences, many of the top national radio groups have not been renewing or signing expensive morning air personalities contracts. This is a nation wide trend. These “cutbacks” have thrown a lot of very talented air personalities out of work, especially in the last three or four years. The reason the radio groups have been cutting back expensive morning shows is simple – with the declining audiences, the radio stations can no longer command exceptionally high advertising rates for morning spots. Thus, the radio groups are cutting expenses.

At the same time, national revenues for the radio industry are flat, with almost no growth. The broadcast companies have been cutting expenses in most every way possible. In fact, some of the larger radio groups are now “voice tracking” multiple radio stations with ONE air personality. They have one personality sitting in a studio recording their one liners, jokes and trivial blabber and that “personality audio” is heard on numerous radio stations throughout the entire country. This cuts the cost of hiring air personalities (disc jockeys) in many different markets. 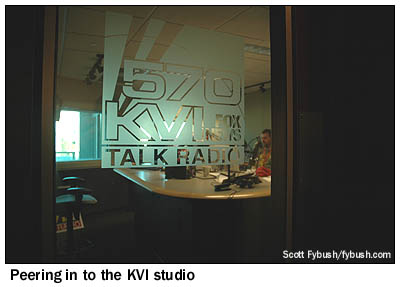 The one format that remains local and live are NEWS stations. News is news and timely and must be delivered in continuous updates of local, regional and national stories. Talk radio stations are sometimes “live” and local, but more and more talk radio stations are subscribing to national syndicated talk shows that are broadcast nationally. This greatly reduces the cost of locally originated talk shows and highly paid talk show hosts.

TV is also is a continuous state of flux. Network stations for CBS, ABC, NBC and FOX are largely at the mercy of the national network programming. Right now, CBS is, by far, the most popular national network. ABC is a very weak 2nd place. NBC a distant 3rd place. And, FOX is a far distant 4th. This is based on the popularity of the top 20 TV shows nationally and total viewers to each network.

When it comes to local TV news, TV viewers are very slow to change stations. Whereas TV viewers will quickly sample (try out) new network or syndicated TV programs, most TV viewers get into a habit of watching ONE TV station for their local and/or national news broadcasts. Any TV station that attempts to increase their local TV news ratings just invest a lot of money into marketing and advertising to attempt to lure TV news viewers from another station to their TV newscasts. It usually takes years to significantly change local news TV ratings.

With all of the radio and TV changes in listenership and viewership, broadcast advertising has changed dramatically over the past couple of years, too. During the 2007/2008 recession and before, an advertiser could often buy TV advertising at the last minute – just a week or two in advance. Now, the demand for TV time is so great, an advertising must plan at least several months in advance to get decent programs and lower rates. When a TV station is sold out or close to sold out, the TV advertising rates soar through the ceiling. But, if a TV station has a lot of unsold time, the rates will be much lower.

With TV advertising, “ratings” largely determine the rates that each station will charge clients for various TV programs. BUT, there is one even larger influence – “supply and demand”. When the demand for TV advertising greatly exceeds the time each station has for sale, the rates go up and Up and UP. It is a “trickle down” theory. The top rated TV stations and programs are the first to sell out their available advertising time. When the top stations get sold out, advertisers that need and want advertising time are forced to buy time on lesser rated TV stations, which causes even low rated stations to sell out also.

The point is, smart TV advertisers are having to plan much further in advance. As an advertising agency specializing in TV & radio advertising, it is oftentimes difficult for advertising clients to understand why we ask them to plan way in advance and to plan our advertising, promotion and marketing for long term. As an example, last fall, I predicted to my clients that TV rates would increase by at least 30 – 40% by early 2014. The TV rates have gone up at least that much and even more! So, our clients that followed our advice last fall and planned advertising for the entire 2014 year, received the benefit of substantially lower TV advertising rates.

Technology has also greatly changed for TV and radio. Many years ago, I handled a statewide political campaign. We were advertising on 17 different TV stations and 77 radio stations. Every time we changed a commercial (which was often!), we had to ship out tapes to all of these TV and radio stations, which frequently took two or more days to receive. Now, radio spots are sent to radio stations in an MP3 file. TV spots are uploaded by our TV production company to each TV stations website. Everything is done electronically!

The future of both TV and radio advertising is very bright. Some people think that satellite radio (with NO commercials!) will doom commercial radio. The truth is the market penetration of satellite radio remains very small.

As an advertising agency, Sparky is widely recognized as one of the most successful advertising people anywhere on the west coast.  The track record of client success stories is very well documented and impressive.  He has handled clients all over the State of Washington, Oregon, Idaho, Montana, Alaska, California and Arizona.