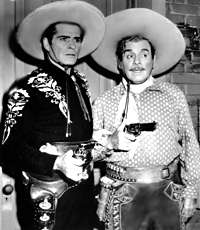 Although he played character roles in 90 films, he is best remembered as Pancho, the amiable sidekick (pictured, right) in the 1950’s Cisco Kid TV Series starring Duncan Renaldo.  He died of cancer Sep 10, 1961 at age 80.

Also in 1881, gossip columnist Louella Parsons was born in Freeport Illinois.  Her rather lacklustre radio personality didn’t keep her from fronting a succession of big budget star vehicles on network radio, including Hollywood Hotel & Hollywood Premiere.  For six years she also had a 15 minute showbusiness gossip show on Sunday night.  She died of arteriosclerosis Dec 9, 1972 at age 91.

In 1915, big-voiced announcer/actor Jim Ameche was born in Kenosha Wisconsin.  His is best remembered as the original title character in radio’s youth adventure series Jack Armstrong, the All-American Boy. He succeeded his older brother Don Ameche as the host/announcer for NBC Radio’s The Chase and Sanborn Hour, and was heard as Mountie Jim West on ABC’s Silver Eagle (1951–55). He had featured roles in radio’s Grand Hotel, Hollywood Playhouse, and Big Sister.  For many years, he was the afternoon announcer on WQXR, the classical radio station of The New York Times, and did numerous radio ads in Phoenix, Arizona in his later years. He died Feb. 4 1983 at age 67.

In 1917, actor Robert Mitchum was born in Bridgeport Connecticut.  After a successful bigscreen career he starred in two of the most watched TV miniseries of all time, ABC’s The Winds of War, and War and Remembrance. He succumbed to lung cancer & emphysema July 1, 1997 at age 79.

In 1921, the first tennis match on radio was broadcast on Pittsburgh’s KDKA, the first commercial radio station in the US. Within eight months the powers that be figured out that sports on radio would bring in big ad revenue. And so, the Davis Cup match between Great Britain and Australia was aired on the radio.

In 1939, after becoming a success with Ben Bernie and Eddie Cantor on network radio, and being featured on NBC’s Chamber Music Society of Lower Basin Street, Dinah Shore started her own Sunday evening radio show on the NBC Blue network. Later Dinah would also have a successful TV career spanning more than three decades.

In 1973, after one of the biggest promotional blitzes in TV history, writer/reporter Sally Quinn joined Hughes Rudd as co-host of the CBS Morning News. Not long after her TV debut, Ms. Quinn found that she wasn’t suited so much for TV and went back to writing fulltime for The Washington Post.

In 1996, Vince Neil, the former singer of ’80’s metal band Motley Crue, attempted to play a show at a club in Indiana.  The show, starting more than four hours late, ended after only three songs. Neil claimed that he wasn’t feeling well, and that the audience of “rednecks” didn’t appreciate his talent. No refunds were offered, and police, called to the scene shortly thereafter, barely staved off a riot of over 500 irate ticket-holders.

In 2000, it was announced that Ice-T would play Detective “Fin” Tutuola on the TV series “Law & Order: Special Victims Unit.”  He has done so through nearly two decades.

In 2002 at 6am, MOJO RADIO debuted in Vancouver on AM730 with “talk radio for guys.”  The station had been off the air for over a month, then stunted for two weeks with modern rock before initiating the new format … which proved to be a mistake.

In 2014, after 37 years of trying, Tom Petty & The Heartbreakers scored their first #1 album on the Billboard 200 with ‘Hypnotic Eye.’

In 2015, Jon Stewart closed out his sixteen year run as the host of  Comedy Central’s The Daily Show with Bruce Springsteen and the E Street Band performing “Land Of Hope And Dreams” and “Born To Run.” Stewart introduced Springsteen saying “here’s my moment of Zen.”

In 2016,  Pete Fountain, the world-reknowned New Orleans jazz clarinetist who was a regular on ABC-TV’s “The Lawrence Welk Show” in the late 1950’s, and guested 22 times on NBC-TV’s “The Tonight Show Starring Johnny Carson,”  suffered heart failure and died in hospice at age 86.

In 2017, the latest round of earnings from major US media companies was stoking fears that as more consumers drop their traditional pay-TV services, the long-term health of the industry’s biggest players would be threatened.

Actress Louise Sorel (Days of Our Lives, Santa Barbara) is 82.

Singer Pat MacDonald of Timbuk 3 is 70.

Singer Randy DeBarge of DeBarge is 64.

Country singers Peggy and Patsy Lynn of The Lynns are 58.

Actor De’voreaux White (Head of the Class, Little House on the Prairie) is 57.

Actor Benito Martinez (13 Reasons Why, How to Get Away with Murder, American Crime, The Shield) is 54.

Actress Ever Carradine {Eureka, Commander in Chief, Once & Again) is 48.

Model/TV producer/actress Adrianne Curry (My Fair Brady, My Antonio, The Tester, The Surreal Life) is 40.

Actress Harley Graham (Sofia the First, The Bold & the Beautiful) is 21.