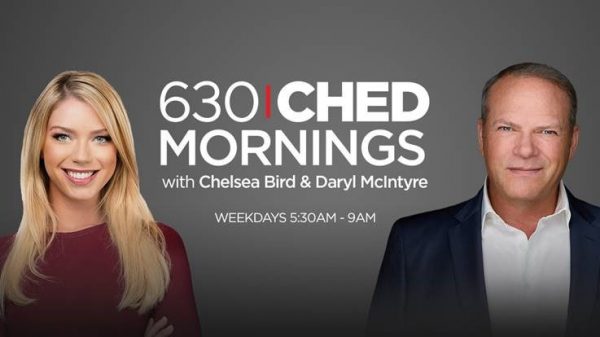 McIntyre Joins Chelsea Bird on May 5

My grandparents built their house in east Edmonton in about 1960. I grew up there. Even now, I can still drive by that house and past the schools I attended when I was little. My family would eventually move to a farm north of Vermilion and I remember the school bus ride into town and insisting our driver, Mrs. Mudryk, switch the radio to 630 CHED. It was THE rock station of the era and is a big part of what drew me to broadcasting in the first place.

It’s pretty amazing to realize in my career I’ve been able to work at the TV station I grew up with CFRN and now the radio station I grew up with. And it’s not just any role. Mornings on 630 CHED has had some brilliant broadcasters over the years including Wes Montgomery, Gord Whitehead and Bruce Bowie. It’s not fair to compare one era to another so, suffice to say, I recognize the history and legacy and I pledge to do my utmost to uphold it.

That’s all very serious (and I assure you, sincere), but we will also have fun in the mornings!  We are all about news and conversation, but life isn’t all serious so we will keep it lively. I’m thrilled to work with Chelsea Bird, at least until she goes on her maternity leave, and Morley Scott and Randy Kilburn always make for great radio. It’s a pleasure and an honour to join this team; familiar but new.

EDMONTON, May 5, 2021 – 630 CHED is thrilled to announce today the hire of legendary Edmonton broadcaster Daryl McIntyre as the new co-host of 630 CHED Mornings with Chelsea Bird, airing weekdays from 5:30 a.m. to 9:00 a.m. MT.

Giving listeners a few days to enjoy the new show with both hosts on-air, Bird departs for maternity leave on Friday, May 7. Tune in to 630 CHED at 630 AM or listen online at 630CHED.com.

McIntyre most recently served as a guest host on 630 CHED in February 2021. Prior to these appearances, McIntyre worked with CTV News Edmonton, formerly CRFN, for 33 years before departing in 2019. He began his broadcasting career in the spring of 1983 with the CKO Radio Network. McIntyre assumes the role of Shaye Ganam who recently moved into the mid-morning slot on 630 CHED and 770 CHQR.

“It’s amazing to realize that over the course of my career I’ve been able to work at the TV station and now the radio station I grew up with. Mornings on 630 CHED have had some brilliant broadcasters over the years,” said Daryl McIntyre. “I’m thrilled to work with Chelsea Bird, at least until she leaves for her maternity leave, and Morley Scott and Randy Kilburn always make for great radio. It’s a pleasure and an honour to join this team; familiar but new.”

“Daryl is a powerhouse in Edmonton and I’m so excited he’s bringing his years of experience as well as his knowledge of this city to 630 CHED Mornings,” said Chelsea Bird. “As I take my maternity leave, I know our listeners are in good hands with Daryl and I can’t wait to return and continue to build this show together.”

“Daryl is a beloved personality in Edmonton with amazing insight into the city’s past and present,” said John Vos, Regional Program Director, Corus Radio Alberta. “We’re thrilled to welcome Daryl to 630 CHED Mornings to join the talented Chelsea Bird and we look forward to listeners starting their day with entertaining and informative programming.”

630 CHED (CHED – AM) is Edmonton’s news, conversation and live sports station. 630 CHED delivers up-to-date news on current events and breaking stories that affect its community and residents, with a broadcast range reaching as far west as the Rockies and to nearly all of Alberta’s borders. The station also holds the official broadcast rights for the Edmonton Oilers and the EE Football Team.