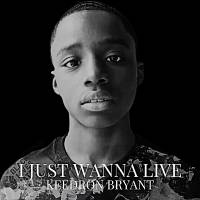 Timing is everything and WARNER RECORDS has signed a deal with 12-year old KEEDRON BRYANT out of JACKSONVILLE, FL because of his vocal talents and the song “I Just Wanna Live,” written by his mother JOHNNETTA BRYANT and inspired by the death of GEORGE FLOYD. The full song and video have been released TODAY (6/19) and coincides with JUNETEENTH, the holiday to commemorate the emancipation of slaves in the U.S.

WARNER RECORDS is donating 100% of the net profits of “I Just Wanna Live” to the NAACP and for every stream of the song on AMAZON MUSIC, the company will donate $1 to the NAACP for the first 24 hours following release of the song, up to $50,000.

The original video of “I Just Wanna Live,” which debuted on YOUTUBE on MAY 26th, features the lyrics “I’m a young Black man doing all that I can” and speaks to the heart and feelings of millions.

KEEDRON told the ASSOCIATED PRESS, “It’s very exciting because this is what GOD’s called me to do. It’s just been an exciting experience to work with my mom.”

JOHNNETTA BRYANT added, that watching the video of GEORGE FLOYD’s death from a knee to his neck on MAY 25th at the hands former MINNEAPOLIS cop DEREK CHAUVIN “really hit my heart just so deeply because I am a mom to a Black son. I have a Black husband. I have Black brothers, uncles, cousins, friends.”

She asked GOD for a sign, telling THE AP, “I needed his wisdom. I went into prayer. He gave me those words so clearly. I shared it with Keedron … and I told him, ‘…I want you to take these words and I want you to pray over them. Meditate on them. Whenever you’re done with them, come out and we’ll record it.’ He did just that.”