The official launch of CBOT on June 2, 1953 was timed to coincide with an event guaranteed to attract the largest audience possible — the Coronation of Queen Elizabeth II. 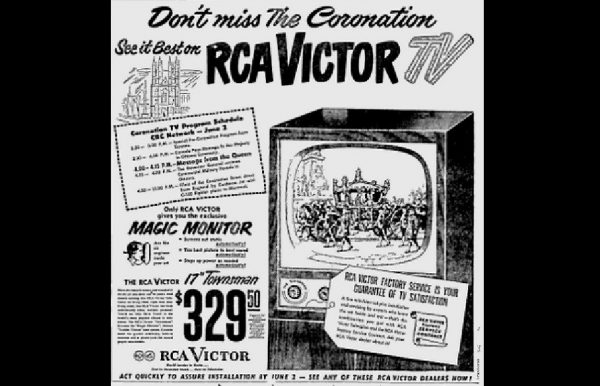 OttawaMatters.com, in partnership with The Historical Society of Ottawa, brings you this weekly feature by Director James Powell, highlighting a moment in the city’s history.

After years of experimentation, commercial television broadcasting was ready for “prime time” by the late 1930s, first with mechanical systems and later with electronic systems.
The British Broadcasting Corporation (BBC) is credited with the first “high-definition” television broadcast when it began regularly scheduled transmissions in late 1936 from its studios at the Alexandra Palace in London using Marconi-EMI’s fully electronic system. “High definition” in this context should not to be confused with today’s high-definition television.  The BBC was broadcasting with just 405 lines of resolution, much less than the 720-1,080 lines considered to be high definition today. Its broadcast resolution was, however, far superior to that of earlier broadcasting systems that had resolutions ranging from roughly 30 to 204 lines. The BBC station’s range was officially only forty kilometres, though unofficially it could reach much farther depending on atmospheric conditions. BBC television quickly became a big hit; the hot, new gift in London during the 1937 Christmas season was the television set. Some 10,000 receivers were sold.

But progress came to a halt at the outbreak of World War II when the BBC suspended its broadcasts owing to fears that German bombers could use its signal to home in onto London. BBC technicians were also needed elsewhere to support the war effort.

In North America, experimentation also went into high gear during the 1930s.

The Canadian experimental station VE9EC, owned by La Presse and CKAC radio in Montreal, broadcast during the early years of the decade using mechanical systems with 60-150 lines of resolution.

In the United States, a number of competing broadcasting systems were also being tested and perfected. The Radio Corporation of America (RCA) began regular experimental television broadcasts in New York City in the spring of 1939, transmitting monochrome (i.e., black and white) programmes from the top of the Empire State Building. RCA’s television subsidiary became the National Broadcasting Corporation (NBC). That same year, RCA began to ramp up its production of television receivers for sale to the general public. RCA also demonstrated the television at the 1939 Canadian National Exposition in Toronto, marketing it as “science’s most modern miracle,” that will soon feature in every home.

In 1940, the Columbia Broadcasting System (CBS) began regular black-and-white television broadcasting in the United States. In the spring of the following year, U.S. regulators adopted the 525-line resolution as the standard for the American television industry, allowing commercial television to move out of its experimental phase. However, like in Britain, the United States’ entry into the war delayed a wider roll-out of commercial television as vacuum tubes used in television sets were required for defence purposes.

Notwithstanding its success south of the border, television was slow to come to Canada.

Read the rest of this feature  HERE.