In 1970, the AM pop-music powerhouse was in the running to be the second-most-listened-to radio station in North America. But 50 years ago today, the CRTC announced new guidelines — and changed the station 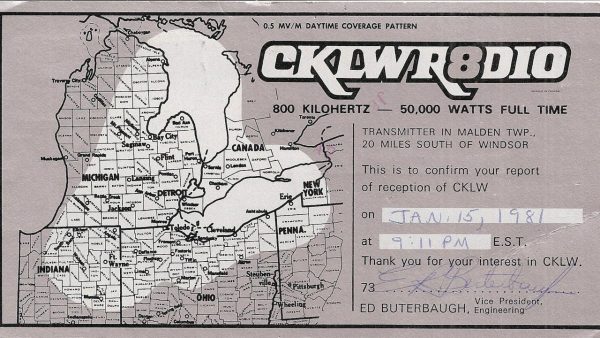 Although it was located in Windsor, CKLW was essentially a Detroit station. (University of Windsor)

On May 22, 1970, the Canadian Radio and Television Commission announced its guidelines for the amount of Canadian content played on radio stations. As of January 18, 1971, 30 per cent of musical selections would have to meet a formula encompassing composition, performance, recording, and song writing produced by Canadian talent. The time lag was a relief to many stations, as it allowed them time to build up a CRTC-friendly music library.

But for Windsor’s AM pop-music powerhouse CKLW, the situation was a serious challenge and compounded existing issues related to its ownership and the large, mostly American, market it served.

By the end of 1970, CKLW was neck-and-neck with Chicago’s WLS as North America’s second-most-listened-to radio station, behind New York City’s WABC. “The Big 8” was the top station across the river in Detroit and ranked as the most-listened-to in markets stretching as far east as Cleveland. Depending on the time of day, its signal reached as many as 28 states and four provinces. Up to 50,000 copies of its weekly top 30 hits chart were sent out within a 300-kilometre radius.

The station’s rise as an international music giant began in 1967, when it adopted a format, developed in California, known as Boss Radio, Much More Music, or the Drake Format (after radio consultant Bill Drake). Reduced DJ chatter allowed a higher volume of songs from a tighter playlist to be played each hour. Because of CKLW’s proximity to Detroit and Motown Records, its playlist had a more soulful sound than other major pop stations in Canada.

“Everything about it rocked,” Richard Brennan observed in a 1985 Windsor Star retrospective. “The 50,000 watt AM signal pounded out the tunes at a frenetic pace, the 20/20 newscasts gave the impression the world was ending, and even the commercials were unforgettable.”

Although it was located in Windsor, CKLW was essentially a Detroit station. Its newscasts gleefully highlighted the latest gruesome incidents in Detroit. Nearly all its advertising was sold and produced across the border. Most troubling to Canadian regulators, CKLW, along with its FM and TV stations, was owned by RKO General, the broadcasting division of the American conglomerate General Tire.

In early 1969, the CRTC ordered RKO General to sell its CKLW properties by September 1, 1970, in order to meet a new requirement that stations be at least 80 per cent Canadian owned. In an unusual move brokered by the CRTC, CKLW-TV was sold in early 1970 to a partnership of John Bassett’s Baton Broadcasting (which owned Toronto’s CFTO-TV) and the CBC, with a requirement that all of Baton’s 75 per cent stake be purchased by the CBC within five years. It operated as a hybrid CBC/CTV outlet until it became a full CBC station in 1975, changing its name to CBET.

Selling the radio side was trickier. By May 1970, at least 20 potential suitors had been contacted or had expressed interest. A weak stock market, an inflated price tag (rumour was that RKO General wanted $16 million), and uncertainty about how CRTC regulations would affect the station’s profitability scared buyers off.

READ THE REST OF THIS INTRIGUING FEATURE  HERE.