by Kathy Michaels  for Infotel.ca 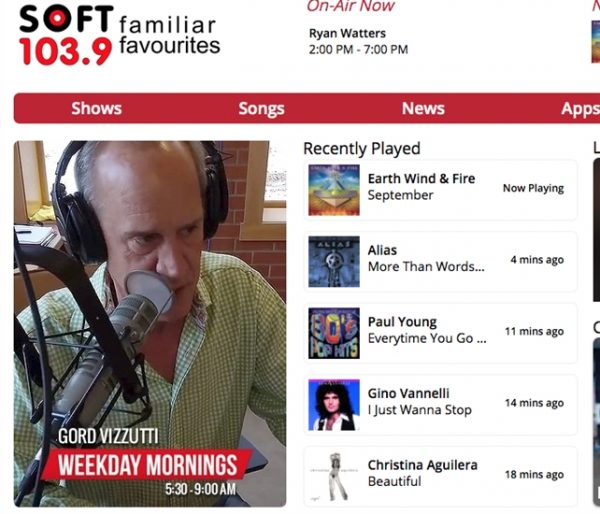 Employees of Kelowna radio station Soft 103.9 said today they were hit in the latest round of media cuts.

In a Facebook post, one employee said: “One hour you are reporting the story and then you are the story. Avenue Radio, owners of Soft 103.9, has declared bankruptcy putting several wonderful people out of work.”

The station is expected to go dark on Friday, according to the employee. Another employee confirmed the information, though didn’t want to go on the record.

Avenue Radio, according to the CRTC last year, is wholly owned by Early Frost Investments Ltd., which is in turn wholly owned by J. Nicholas Frost. It shared an office in downtown Kelowna with Castanet.

Frost, however, said he had no comment on the station going dark, but to look out for a story on Castanet later today.

Frost sold Castanet to Glacier Media nearly a year ago for $22 million.

At that time, Glacier Media announced it would pay $2 million for Castanet’s shares in Avenue Radio.

The acquisition of the Avenue Radio shares were subject to Canadian Radio-television and Telecommunications Commission Approval. That approval had yet to be granted after nearly a year.

Media agencies across the globe have reported reaching sky-high readership in the wake of the COVID-19 pandemic. Many that rely on advertising to survive, however, have suffered and there have been layoffs across the industry.

Last week Black Press, the largest newspaper chain in B.C., announced that it too was feeling the pinch and moved all of its properties to once a week distribution.

“Effective immediately, we are having to make the temporary decision to publish the Vernon Morning Star, Kelowna Capital News, Penticton Western News once per week as opposed to twice per week,” according to an email sent to Capital News paper carriers.

Read the rest of this Infotel.ca story HERE.

HOW MANY OTHER ADVERTISER RELIANT STATIONS WILL FALL THIS SPRING??

Does this mean Glacier Media is going bankrupt?

So, on the station website is an ad for a Kelowna financial consulting firm. The “headline” reads
Don’t File For Bankruptcy…….blah blah blah, call us.

HA !! More like call Alanis Morisette. You know, to show her what is truly ironic

So I guess this means 103.9 in Kelowna is officially done for good. Did I get that right?

So Nick Frost sells for $24 Million just a year ago and cans his staff in the middle of the biggest financial and health crisis of our time. The staff have to be crushed. What an epic failure.

Once again, the people in the trenches get shafted.

This is, sadly, probably the start of a new trend. What are media outlets going to advertise? How do they make payroll?

I see the idiots in Ottawa have allowed waiver of broadcast license fees. Rich are different, you see.

I think that shows who people in Ottawa care for.

Best to all, and I hope you get a gig soon.

The reality is that traditional media companies, particularly print-based ones, are now going through a major restructuring. This has been underway for the past decade on a smaller scale, but this recession/depression is rapidly accelerating it. Advertisers have already flocked to Google and Facebook, and most of those who still support traditional media are either temporarily closed due to the virus outbreak or barely staying in business. Hopefully, business conditions will change, but in the meantime the ad flow to print/radio/TV is diminishing. Glacier Media and Black Press have cut staff and reduced publication frequency (which cuts costs dramatically, due to many fewer papers being printed). Postmedia will likely follow suit. Radio has the great advantage of being very internet-friendly, and podcasts and streaming should help assure its survival. It also can be a very low-cost operation. TV, in my view, is kind of in the middle. Costs are high, and it is highly dependent on advertisers. Stations like CHEK, which are locally-owned and more dependent on a lot of smaller businesses advertising on their station, are likely to be hardest-hit. If this shutdown of businesses lasts any length of time, expect to see the lightly-watched cable channels restructure or disappear. They are almost totally dependent on national advertisers.