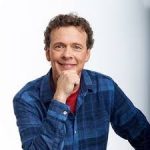 On the day the latest Numeris PPM ratings were released, Graham Hatch is out of his afternoon drive assignment at Vancouver’s CHLG-FM 104.3 The Breeze.   On his Facebook page Hatch tersely announced  he has “left” the Stingray station he has been with for nearly six years.

Hatch has been a part of the BC radio scene for decades, as is evident from the following track of his on-air career as detailed at the Vancouver Broadcasters website: