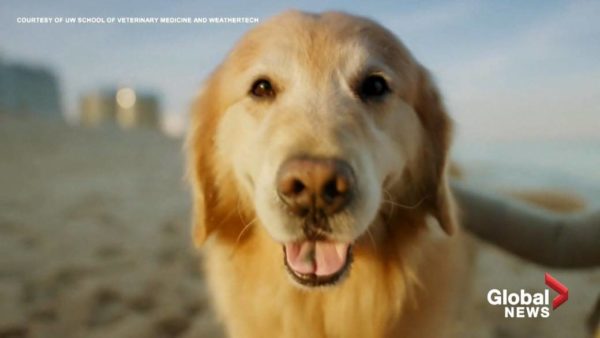 “There he was in this little room, standing in the corner … and he’s wagging his tail at me,” MacNeil, founder and CEO of WeatherTech, said. “I’m like, ‘I’m not putting that dog down. There’s just absolutely no way.”

Though Scout only had a one per cent chance of survival, WeatherTech’s unofficial mascot pulled through.

Now, the golden canine is the star of a 30-second Super Bowl ad that cost his owner a whopping US$6 million.

It’s called “Lucky Dog” and features the heartwarming story of Scout’s unlikely survival. The opening montage shows the dog running on the beach and asks viewers to donate to the University of Wisconsin School of Veterinary Medicine.

Read the rest of this Gobal News article  HERE.

Just think of all the good a $6 million dollar donation would have done.

With all the money that has been donated to cancer research, why haven’t they found a cure, and put themselves out of work ?

If you love your dog, no amount of money is too much. If you dont love dogs or have never had a dog, never mind, you dont understand.

I agree with what Ken Allen said.