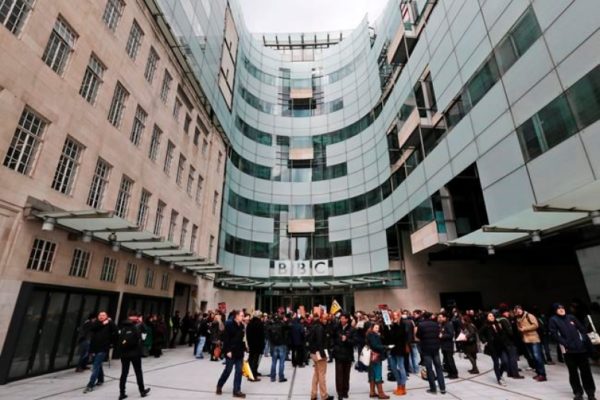 FILE – In this Thursday, March 28, 2013 file photo, BBC journalists and technical staff on strike form a picket line outside BBC’s New Broadcasting House in central London. BBC Director-General Tony Hall announced Monday, Jan. 20, 2020 that he will step down from the helm of the U.K. broadcaster in six months after seven years in the job. (AP Photo/Lefteris Pitarakis, file)

LONDON — The BBC said Wednesday that plans to “modernize” the British broadcaster’s newsroom will lead to the loss of an estimated 450 jobs.

The cuts represent a substantial blow to the national public service broadcaster, which enjoys a worldwide reputation for the high quality of its news and entertainment programs.

Fran Unsworth, director of news and current affairs, said the streamlining will be carried out with an eye on digital journalism.

“We need to reshape BBC News for the next decade in a way which saves substantial amounts of money,” Unsworth said. “We are spending too much of our resources on traditional linear broadcasting and not enough on digital.”

She said the company “has to face up to the changing way audiences are using us” and find new ways of engaging with viewers and listeners.

The broadcaster said it wants to “reduce duplication” while saving 80 million pounds ($105 million) in costs.