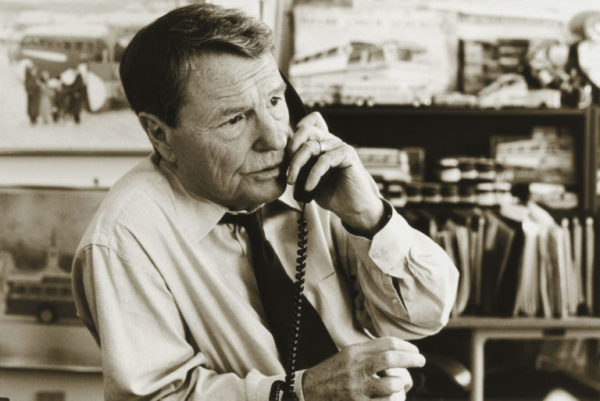 A man PBS calls “a giant in journalism known for his tenacity and dedication to simply delivering the news” died peacefully in his sleep at home on Thursday (1/23), at the age of 85.

Within hours, former colleagues, peers, TV journalists and Americans were reacting to the loss of NewsHour co-founder Jim Lehrer.

In a story posted at 1pm Eastern on the PBS NewsHour website, the newscast — today anchored by Judy Woodruff, saluted Lehrer for being a journalist without “a self-centered endeavor.”

PBS continued, “He always told those who worked with him: ‘It’s not about us.’ Night after night, Jim led by example that being yourself — journalist, writer, family man, citizen — can be a high calling.”

For 36 years, Jim began the nightly newscast formerly known as the MacNeil/Lehrer NewsHour, co-hosted by Bob MacNeil, with a simple phrase: “Good Evening, I’m Jim Lehrer.” PBS continued, “Jim reported the news with a clear sense of purpose and integrity– even as the world of media changed around him.”

Jim was born in 1934 in Wichita, the son of a bank clerk and a bus station manager. He attended Victoria College in Texas and then studied journalism at the University of Missouri.

Lehrer served three years as an infantry officer in the late 1950s, including time in the Pacific, as a U.S. Marine. He saw no combat, but spoke often of how the experience shaped him. “Seldom a day goes by, that I don’t know that I am doing something because of something I learned in the Marine Corps,” he said at a 2010 parade the Corps put on, in his honor.