At 86, the godfather of reality television isn’t finished creating…

LAS VEGAS – On a wall in John Barbour’s home office is a cast of famous faces he’s met over the years – often in front of a rolling TV camera.

There he is shaking Ronald Reagan’s hand.

And that’s him roasting his mentor, Redd Foxx, on “The Dean Martin Show.”

And there he is interviewing Jane Fonda — and Muhammad Ali.

“You ain’t a Henny Youngman, but you’re all mine,” Frank Sinatra wrote of “I Met A Man I Didn’t Like” – Barbour’s second comedy record. “I will be in touch during the two weeks I’m in L.A., I have a thought regarding you and me.”

The relics in Barbour’s office are just a few from a show business career that earned him five Emmys.

Barbour is best known as “the godfather of reality TV” for his work as creator, producer and co-host of the hit show “Real People.” The program showed viewers pre-taped segments infused with banter about jobs and hobbies of everyday folks.  It aired from 1979 to 1984.

But almost a decade earlier, Barbour captivated audiences with a sharp and humorous interviewing style as the original host of the Los Angeles morning show “AM LA.”

His book is called, Your Mother’s Not a Virgin, which would make a great stocking stuffer this Christmas

To purchase his remarkable book, by the remarkable man, click on image below. 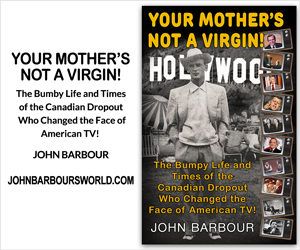