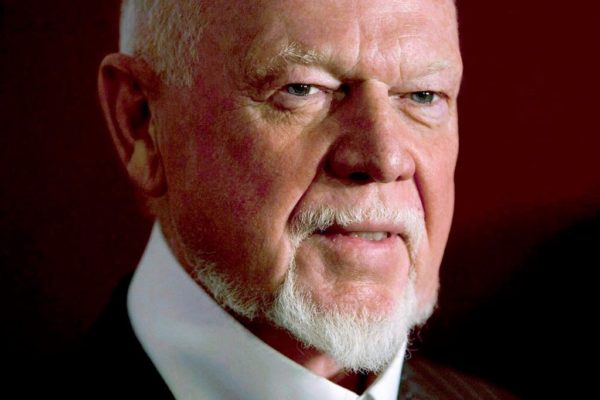 Hockey commentator Don Cherry is shown in Toronto on February 15, 2011. Cherry says he’s frustrated about the lack of visible poppies being worn by new Canadians ahead of Remembrance Day. THE CANADIAN PRESS/Darren Calabrese
.

Sportsnet says Don Cherry will be immediately stepping down from Hockey Night in Canada after comments he made on Saturday night’s Coach’s Corner about newcomers to Canada not wearing poppies sparked huge backlash.

A statement released by Sportsnet said following discussions with Cherry, “it has been decided it is the right time for him to immediately step down.”

President of Sportsnet Bart Yabsley thanked Cherry for his contributions to hockey and sports broadcasting in Canada. “Don is synonymous with hockey and has played an integral role in growing the game over the past 40 years,” read the statement.

The move follows what the organization calls Cherry’s “divisive remarks that do not represent our values or what we stand for,” made over this past weekend’s broadcast.

The 85-year-old said on his weekly segment as part of Hockey Night in Canada on Saturday that he’s less frequently seeing people wearing poppies anymore to honour fallen Canadian soldiers – and he singled out those he believes are immigrants in Toronto, prompting a swift online backlash.

CHECK HERE  FOR MUCH MORE NEWS from CITY-TV in EDMONTON

Seems ironic that anyone that calls for ” you people ” can loose your job. Don refers to everyone as you people and CBC spineless as usual, does not have the back of a guy who has always said it the way it was. Freedom of speech is a right that our solders fought for and the corporations are taking it away. CBC, you have done this before with Dave Hodge and he landed on his feet and so will Don. Oh and one more thing, without hockey night in Canada, your programming sucks and there will be a day that the Canadian government will stop subsidizing your weak non interesting existence you parasites.

Good bye HNIC..we’re loosing all our common sense and moderation .. firing someone who has a history of loving the game and all the diversity Canada offers is extreme to say the least. His choice of words is always the greatest but the intent and how he’s lived his life in the public eye has sure validated the type of person he is .Actions speak louder than words.

Hey Scott A .. it was a Sportsnet (Rogers) decision. CBC has no control over HNIC any more.

Looking for any excuse to save $$$ by ending his contract ?

That’s why that segment is called Coach’s Corner, not HNIC’s Politically Correct Corner.
You blew it, Rogers

Are people likely to cancel their Rogers products over this ?
Telus never, ever fired Don Cherry!

PC stupidity gone wild. I hope he sues the network and wins a lot. As for his sidekick I wont even mention his spineless name, he deserves a punch in the nose.

If you think this one stupid rant by Don Cherry was the only reason he got fired, you are wrong. He has pushed the boundaries, pushed the envelope for a long time. To the point of thinking he was invincible. He is an out and out racist and his discriminatory comments were the last straw. He is a dinosaur from my uncles time, completely out of touch with the free world of 2019. Yes, he is free to speak stupid and dumb ass, and yes, Sportsnet is free to fire him.

Deres two kinds a talk, locker room talk and public talk, we all know that. Don didn’t seem to get it.

I haven’t been watching Coach’s Corner and Don Cherry for years.
What has he done and said that made you call him a racist ?

Sportsnet, not the CBC or Rogers, asked him to resign. The NHL put the word to Sportsnet that Cherry had to go…this being the only league in N.America that doesn’t assume any responsibility for brain damage caused by concussions suffered by past/present players.
Rob Wilson…Cherry’s unpredictable & often controversial comments were why he drew such large ratings which allowed HNIC to charge premium prices for advertising during Coaches Corner. Cherry speaks from the heart, right or wrongly…I will miss his segments, and regret the vanilla society we have become….

Rob would love for you to explain his racism? Like its been said all over the internet. We have a blackface not once not twice maybe 3, 4 or 5 times, groper, lying, feminist and he is relected to be PRIME MINISTER but someone who uses the phrase “you people” gets the ax. Rob Canada is heading down a very slippery socialist road but that is a story for another time.

For that blowhard suit who said Cherry’s comments do not represent ‘our values and what we stand for’. Lest we forget it was Rogers who attempted to negatively bill its customers, until they were outed and had to walk back their fraudulent scheme. What ‘values’ were those Rogers?

I watched a segment on Don Cherry response from public. Global went to the street looking for thoughts…every single response was against Don!! And they included responses from Singh and a few other pukes!! Global, go fk yourselves… as far as Rob Wilson, he’s a Snowflake aka an IDIOT! a destroyer of our nation.

It also seems that the Coach’s Corner ran three times that night because of time zones! Along with a 7 second delay on Cherry who the heck was asleep at the switch and have they been fired?

You get this level of outrage when cognitive dissonance is unable to supress observable fact.

Don did nothing wrong.