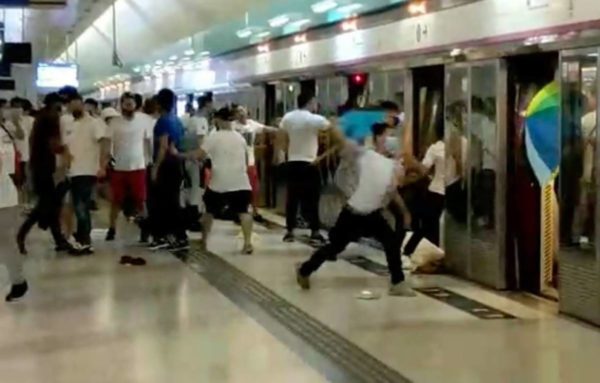 A Fairchild Radio host enraged many Chinese Canadians in the Vancouver area with his interpretation of this incident at at Hong Kong train station.
.

One of the Vancouver’s most-listened-to multilingual radio stations has parted ways with a controversial host.

On its Facebook page, Fairchild Radio has announced that Thomas Leung resigned due to “personal reasons”.

That caused a torrent of comments, including from many who thanked the station and from others who took issue with Leung being allowed to have a broadcasting platform in the first place.

This came after Leung caused an uproar with a commentary that seemed to support white-shirted thugs who attacked Hong Kong civilians at the Yuen Long transit station on July 21.

Hong Kong pro-democracy activists believed that these white-shirted, weapon-wielding assailants were operating in cahoots with the police, who were nowhere to be seen.

Leung’s resignation came after a campaign was launched by supporters of Hong Kong activists in Metro Vancouver.

They wrote to the Canadian Broadcast Standards Council, noting that Leung has been a vocal supporter of the Beijing government and accusing him of blaming the victims in a way that was “disgusting and completely unacceptable”.

They also alleged that Leung has a history of maligning victims, including a woman who was permanently blinded by the actions of Hong Kong police.

In its statement, Fairchild promised to “strive to do our best in the future”.