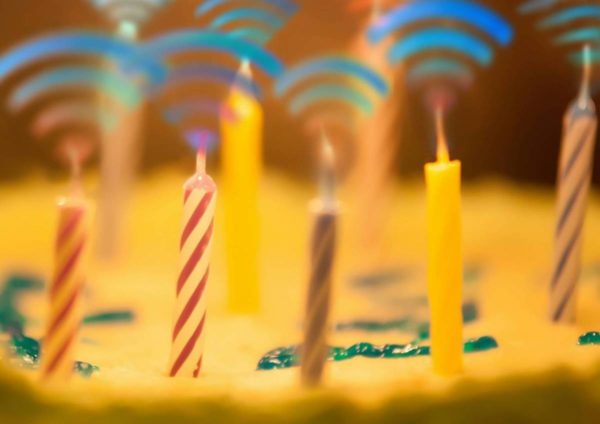 Can you imagine your phone; your laptop, or your world without Wi-Fi?

This short-range radio standard for transmitting data without wires was decades in the making but its public debut 20 years ago as the optional AirPort-branded feature in an Apple laptop was sudden and unexpected. And its effect on consumer expectations, where laptops were concerned, was like night and day.

At a stroke, the release of the iBook G3 with optional Wi-Fi in 1999 rendered all other laptops without Wi-Fi obsolete.

In a very real way, the iBook G3 was every bit as disruptive in 1999 as the Apple Macintosh had been in 1984, when its graphical user interface (GUI) instantly made text-based personal computing obsolete.

Arguably, the iBook G3’s introduction of Wi-Fi went even a bit farther, helping pave the way for Apple’s great tech disruptions in the next decade: the iPhone in 2007 and the iPad in 2010.

The original iBook G3 (“clamshell”) was unveiled by Apple cofounder Steve Jobs during the keynote presentation at the Macworld Conference & Expo, in New York City, on June 21, 1999.

With its its rounded, two-toned, translucent plastic and rubber carapace, the iBook G3 was styled to be the laptop equivalent of Apple’s wildly successful iMac (G3) desktop computers. The iBook was even marketed as “iMac to go“.

Where Apple especially designed the iBook G3 to go was to school. Everything about the laptop—its colourful styling, its ruggedized construction and the integral carrying handle in the hinge—was designed to help make it a popular choice with both students and educators.

The new Apple consumer portable certainly was popular. Six weeks after its unveiling, Apple had more than 140,000 advance orders for the iBook G3—a number that doubled by October, according to the 1999 book Apple Confidential 2.0.

READ THE REST OF THIS STORY  HERE  at Straight.com

Stanley Q. Woodvine is a homeless resident of Vancouver who has worked in the past as an illustrator, graphic designer, and writer. Follow Stanley on Twitter at @sqwabb.