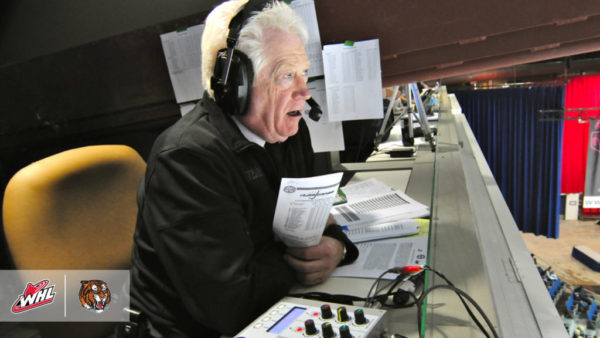 The only voice the Tigers have ever had was named to the Western Association of Broadcasters Hall of Fame Thursday, following up his induction into the Alberta Hockey Hall of Fame earlier this month.

Ridley has been at the microphone in Medicine Hat ever since the Tigers joined the Western Hockey League to start the 1970-71 season. Over the past 49 years, Ridley has called all but a single game and is poised to eclipse the 4,000-game mark next season.

Ridley – who spent the majority of his years with the Tigers driving the team bus as well – was also inducted into the Alberta Sports Hall of Fame in 2000, and earned the WHL’s Distinguished Service Award in 2006-2007.

The Western Association of Broadcasters Hall of Fame induction ceremony will be held June 6 in Banff.

In addition to Ridley, Boyd Kozak (below), the recently retired News Director from Winnipeg’s QX104 FM, will also be inducted into the WAB Hall of Fame.