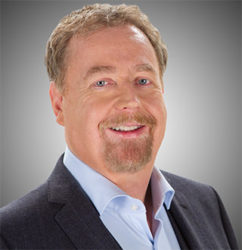 He was hosting Friday where Solomon typically takes the day off, since Evan hosts CTV’s Question Period political show on Sundays.  However Caroll made no mention of Solomon, and, while acknowledging that this was his first show, he told a caller or two that he would be back throughout the weeks that follow.

It’s possible the replacement is only temporary while Solomon takes some vacation time.  But to this veteran radio listener it sounded like more than that.

Carroll joined CFRB in 1998 and established himself as an effective talk show host.  He went to KFI Los Angeles in 2012, but was still heard afternoons in Toronto on AM640.  When he returned to Canada in 2016 he failed to get a longterm commitment from AM 640, so instead became the breakfast-time host at Ottawa’s CFRA where he’s been the past three years.

At one point during his tenure in L.A. Carroll was ranked in 5th position on Newsmax’s 50 most influential radio talk hosts.