Welcome to JJ-365 Salutes. Over 2018 we pay tribute daily to one of “The Good Ones.” Today we are shining the light on Jesse Dylan. 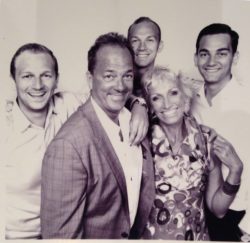 I remember meeting Rita Woodman when she came to do late nights at CHUM in the late 70’s. I believe she was the first woman to do her own show on that giant of a radio station. We’d talk once in awhile, and she told me about her brothers and sisters and one brother in particular, who is today’s salute.
I’d see Jesse at, you guessed it, industry events, conventions and award shows. He and 365’er Gene Valaitis always seemed to be up on stage accepting one award or another for the Jesse and Gene show. I loved getting the airchecks of their shows, laughed my ass off, and played them for the on-air talent that I worked with. I believe in ‘on-air mentors’, meaning working with an up and comer to find a personality or two that they could listen to, relate with, study their techniques and rip them off!
I had lots of my team coming in saying “hey have you got the latest Jesse and Gene yet?”
Chemistry is a key ingredient for radio success for teams, yet it is most effective when bringing content to life: “Chemistry is not content, chemistry brings content to life.” ™
Yes Jesse and Gene have an amazing chemistry, but they did the work on the content, always preparing their shows and coming forward with their latest curiosities, and situation comedy like material. They made a huge and indelible impression in this business of ours.

Jesse was born in Montreal. His father, Steve Woodman, was a well-known broadcaster and at the time was on-air at CFCF. They moved to Vancouver where his pops did mornings on CKWX. When he was 5 they moved to Toronto (Oakville) and his dad was on mornings with Keith Rich on CKEY (Woodman & Rich). They got head-hunted and they were off again, this time to NYC.
It was Woodman & Rich ‘Coast to Coast’ on the NBC Monitor Network out of 30 Rock (30 Rockefeller Centre). After NYC off they all went, with his three brothers and three sisters, to Malibu where his famous father did mornings at the legendary KDAY in Los Angeles, and also Voice over work at Hanna Barberra with Mel Blanc and many other famous ones. Back in the day his dad was also a great puppeteer and one day in walked some young hairy dude named Jim Henson. He had a couple of weird puppets with him and his dad said the guy was very talented. He was trying to market Jim (pre-Sesame St) at the time. They had an endless parade of celebs through their home as his pops was plugged into the pack, Robert Goulet being one of his closest pals. Steve spent his early and formative teen years as a Junior Life Guard at Zuma Beach in Malibu. It was the 60’s baby and a very cool time to be a teen in Malibu. Sadly, he says his childhood neighbourhood got burnt down in this past fire.

Like almost everyone else, Jesse got his radio start in high school at South Delta Sr Secondary in Tsawwassen. He was student council President for two years and part of the gig was reading the PA announcements, which he turned into a mini-five-minute radio show every day. It was off to BCIT after high school, and with his degree in broadcast journalism in hand he headed out into the stream. He started at CJVI Victoria, with stints at LG73, 630 CHED, CJOR, Power 104 (Kelowna), AM106 Calgary (formerly CFCN) and then Q107. He says he worked with a ShitTon of talented bastards along the way.
Gary Slaight hired him out of Calgary. Me met Lou in the Yonge and Bloor studios. Gary said “I liked your air check – go down the hall and into the news room and meet Gene Valaitis. See if you two can work together and then come back here”
OK he said.
“Hi I’m Jesse”
“Hi I’m Gene”
“Think we can work together?”
“Yeah – no ego here”
“Yeah – me too”
“Cool?” “Cool”
Gary “Well?”
“Yeah, no problem – we can work together”

Jesse says the first 10 weeks of the Jesse & Gene morning show on Q107 really sucked and that they were awful together:
“We just didn’t click, had zero chemistry, and here I was in my dream gig failing miserably and I knew it but I couldn’t find the levers to bring it out of the nose dive. Slaight pulled me in the office after the show one day and I was thinking …yeah…I’d fire my ass too. But he didn’t. He said ‘Where TF is that guy, I hired on the air check? What happened to him?’ I said ‘Lou, we have no chemistry…we suck’….He said ‘have you gone out and got Phucked up together?’..I said ‘no’….He said ‘here’…..and hands me three hundred dollar bills. ‘Take Gene out and get wasted tonight…That’s an order’.
The next morning we had the best show of our lives and the Jesse & Gene magic was on. In a big way, on and off the air.” Gary’s suggestion is something they took to heart and practiced regularly.
They won the ACTRA award for on-air personalities of the year and their ratings were on fire. They took their morning show to Average Quarter Hours of 140,000 people (listening at any given time). Big numbers and the highest Q had ever had at the time.
Then they got hunted down by Tony Viner and Sandy Sanderson at CFTR to come across the street. With wheel barrow’s full of cash, cars and prizes they walked. It was bitter sweet replacing the late and great Tom Rivers, a man they had mad respect for. When TR went all news and they all got fired, Danny Kingsbury called, and they moved the show to AM640. They went from Zero to 750,000 listeners in 6 months, got big bonus checks and carried out the plan of infecting Toronto with the Jesse & Gene magic. Later Q got themselves into ratings trouble and courted them hard to come back and they did.

Jesse says things weren’t the same when they got back to the Mighty Q. It had been the President of WIC Ted Smith’s idea, (love that guy says Jesse) to come back and he feels it didn’t go over so well with the management at the time. They had been planning a different strategy, so the last Jesse & Gene ride was a little bumpy.
They ended what he felt was the best morning show in the country on May 5th, 1997. 12 years of Jesse & Gene came to an end. Gene and Jesse have remained best of friends and are now both 365’ers.
Jesse wants to make sure to shout out to Tony Daniels and ‘Spike’ John FK Gallagher as he credits them for being major players for their morning show.

What was next? “I was always the one that negotiated our deals. I liked putting deals together. Record deals, phone cards, merchandise, beer deals. I got good at putting deals together. So in my spare time when the show ended and everyone else was working….I had two hobbies. Triathlon and business. I became a member of the National Canadian Triathlon Team and have since competed in some 55 Triathlons including several World Championships.
My second hobby of deal making turned into business building and frankly, Empire building. I’ve built 8 companies. Sold three and have taken two public. I’m currently CEO of GOOD TSXV a company I founded 7 years ago and took public this year. It’s in the advertising technology sector. We’ve been growing quickly of late and I am happy to announce two new acquisitions which are 495 Communications with office in New York City and Santa Monica, and Impression X with offices also in southern California. We have suddenly become a global company in advertising technology doing business around the world.”

He has a division that he’s been incubating a division revolving around content, influencers, artists, pod casters and broadcasters for distribution and monetization.
He says that will likely launch early next year and will help fuel deal flow and more revenue’s to GOOD.

Jesse sums up: “A cool by-product of this new entity if executed properly will be to help redefine what radio should be in the future. After all radio is an old modality that could use a rebirth. With smart speakers, cars and connectivity now ubiquitous – redefining listening and interactivity is rather obvious. Gene has been brought in to work on this very exciting project. The MOFO is doing a good job.
I’ve been with the love of my life (Jill) for 39 years. Raised three dashingly handsome young men (Justin, Josh and Joel) who all work for GOOD.
I live in Vancouver overlooking the Ocean and have a home in Whistler. I’ve architected my life the way I always dreamed it could be and I’m a very grateful SOB.
Now Jesse & Gene stories? OMG, where to begin. Our forthcoming book will take care of that. Love to all my old pals from the days of madness and fun. Peace Brothers and Sisters.”

Jesse’s email signature contains these words: “A river cuts through rock, not because of its power, but because of its persistence.” That pretty much sums him up.
Determined and disciplined, smart, fearless, entrepreneurial, energetic, funny, and so talented. Jesse and Gene will go down as one of the funniest, edgiest, and successful and wonderfully twisted morning shows in radio, here or anywhere. He’s another one of those that got away, meaning I never had the chance to work with him, but sure wish I did. Now he’s kicking it in business and I am sure we’ll be hearing much more about him. Well done Jesse. Atta be!

Thank you, Jesse Dylan for being one of “The Good Ones”. Feel free to like and share Jesse’s positive story. Who is the subject of tomorrow’s JJ-365 Salutes? As they say, stay tuned.

Jim JJ Johnston is the CEO, President and Chief Programmer/Talent/Content Coach for JJIMS INC. and works with talent in many different industries worldwide