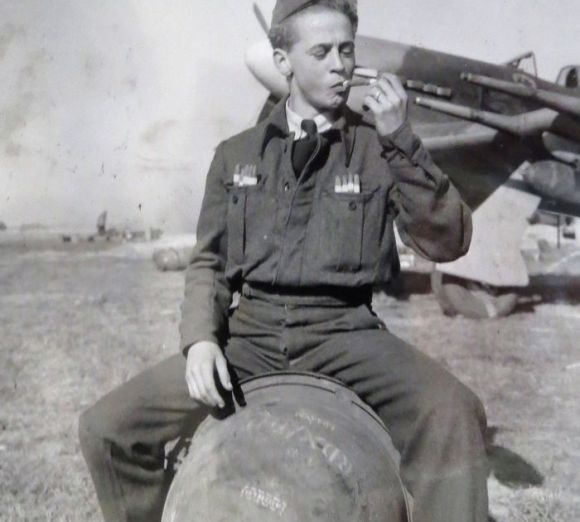 Handout photo of Big Al Davidson smoking a cigar on the bomb. Nice shot of a Typhoon right behind him. Department of National Defence / PNG
.

Broadcasting icon Big Al Davidson dominated the Lower Mainland airwaves with his fiery and often controversial sportscasts during his more than two decades as sports director at CKNW.

What his thousands of listeners never knew was that Davidson — who joined CKNW in 1958 after working at radio stations across Canada — was a Second World War veteran. Only 16 when he joined the Royal Canadian Air Force in 1943, he was still a teenager when he was sent overseas to serve with the 438 Wildcat Squadron.

This Remembrance Day feature, adapted from an upcoming biography being written by trial lawyer and Douglas College instructor Michael Sporer, focuses on Davidson’s experiences during D-Day and the pivotal battles that followed.

The story picks up in 1943, when Al was a Grade 11 student in Port Arthur (Thunder Bay), Ontario.

THE SAME STORY IS AVAILABLE  HERE AT THE Vancouver Sun WEBSITE