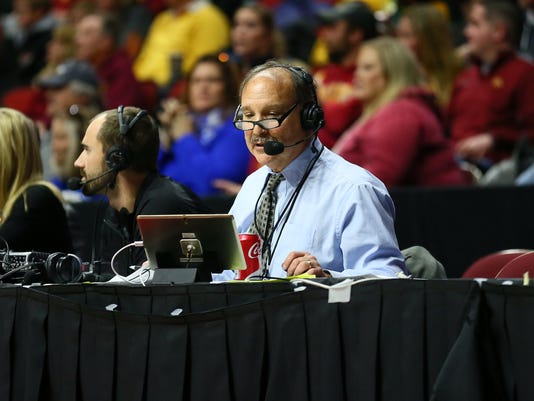 (Photo: Chris Donahue/Special to the Register)

Larry Cotlar was, at his heart, a teller of stories.

Stories of big-time professional athletes and coaches, but also of obscure Iowa high schoolers and anyone else who crossed his well-worn path.

Cotlar even drifted off to sleep while conversing about sports.

Cotlar, 66, died Saturday night in Des Moines when flash flooding hit the area. The van he was in stalled on rain-swollen streets and he was pulled away by the rushing waters as he exited.

Police and rescue personnel from the Des Moines Fire Department searched the area near 50th Street and Twana Drive on the city’s west side. His body was recovered three and a half hours later, several blocks from the original call.

Cotlar leaves behind a wife, Deb Brewer-Cotlar, and two sons, Zac Couture and Zachary Brewer. And a 44-year sports broadcasting legacy that may never be matched.
.

“I think Larry would be a guy that would not want to talk about his legacy,” said Andy Garman, who co-hosted an afternoon sports radio show with Cotlar for five years on 1700-AM in Des Moines. “He just loved doing his job every day. He came in with a smile and said, ‘Let’s go to work.’”